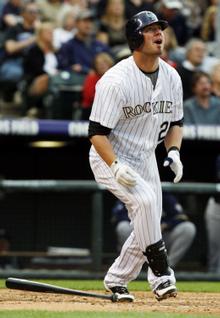 2005 and 2006 saw Ian Stewart's path to the majors slow down as he battled injury and the team saw the emergence of Garrett Atkins at the hot corner. But Stewart persevered and, upon advancement to Triple-A in 2007, had a good season at Colorado Springs (if somewhat aided by his home park). It was good enough for Stewart to be called up in the middle of August. He hit his first career home run, a grtand slam, off the Pirate's Tony Armas. He would not be with the team for the postseason.

Let's look forward to a full season of Ian Stewart in 2009.

The runner-up for this award is Seth Smith.