Tuesday Rockpile: Still waiting for Matt Holliday to be officially traded to the Oakland Athletics

Share All sharing options for: Tuesday Rockpile: Still waiting for Matt Holliday to be officially traded to the Oakland Athletics

Because this has moved David's examination of the trade down a bit, click here to go there and continue the discussion. 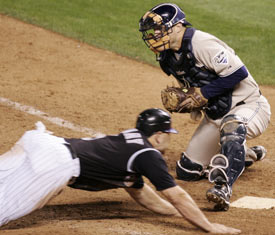 His slide on 1 October 2007 will forever be the most cherished memory Rockies fans have of Matt Holliday. As Dave Krieger puts it (in his piece on why Holliday was traded):

He became an indelible part of our collective memory late on the night of Oct. 1, 2007, bloodying his chin while sliding across home plate (or not) to put the Rockies into the postseason.

Slugger Matt Holliday was the lucky one.

He took his bat and got out of town.

With a .319 career average, Holliday has departed in a trade to Oakland. He waved goodbye with customary quiet grace, despite being trashed by ownership in his final weeks as a member of the Rockies.

For a franchise that prides itself on high character and a low payroll, the Rockies again proved in this deal it is far easier to be cheap than classy.

Matt Holliday had this to say:

"I can't tell you how much I appreciated how me and my family were treated in Denver by the fan and the people behind the scenes in the organization. They were so important. And that's the saddest thing."

Garrett Atkins is sad to see his friend go, but thinks this might be a positive for his chances to stay with the Rockies:

"I don't know if it means I am next," Atkins said. "I think they might want to keep me more now. At least that is what I am hoping."

And today is Veterans Day, or Remembrance Day and Armistice Day elsewhere. Take a moment to thank all those who have served.