How much Cook is left in the kitchen?

Share All sharing options for: How much Cook is left in the kitchen?

Okay, so while my BTB Community WAR project post kicked off a solid discussion about how much projected playing time we could count on from Garrett Atkins and Ryan Spilborghs, some of the other possible points of discussion were left in the dust. Lesson to me: compartmentalize. So I'm going to separate out some of the other bullet points so we can give them the consideration they deserve, starting with what appears to me the one CHONE projection which seems overly negative. The one that projects Aaron Cook to allow 5.09 runs per game (4.7 earned), more than he has since his second season in the big leagues in 2003.

There could be reason to suspect a fall back from Cook, among them a second half in 2008 that showed him to be exactly the kind of pitcher that CHONE projects:

What was odd about the second half spike is that while one aspect of run prevention, Cook's HR rate, improved considerably (12 HR's given up in the first half, one in the second) his strikeout rate took a dip from 11.8% to 9.1%. Think about what that meant in the bigger picture: fewer hits off of contact were leaving the ballpark with the dipping HR rate, while at the same time more balls were being put into play with the dipping K rate. Cook was shifting into a more defensive dependent mode of pitching, and at first glance, his defense seems to have let him down.

However, that's not the complete story, closer scrutiny of Cook's batted ball data in the second half reveals one glaring reason why hitters would suddenly find it much easier to get base hits off of him:

The average line drive rate for the National League last season was just barely over 19%. Cook for his career has averaged 19.4%. For three of the last four months of the season, Cook was well over what we would expect from a major league pitcher. The question we have to ask in projecting him for next season is why. Was it simply bad luck? Was it just a matter of fatigue? His fastball velocity wouldn't indicate this, as he was actually throwing harder in August and September than he was in April and May. Or is there something far more troubling afoot here that would indicate a problem that will carry over into 2009?

I want to hear what the Purple Row community thinks about what we could expect from Aaron in 2009. For a reference point, his 2009 projections from CHONE, Bill James and Marcel each predict him to go 182 innings. CHONE apparently proects the trouble with his line drive rate to continue, as it gives him a BABIP of .325 versus .307 and .303 for the other two. CHONE, as I mentioned in the first paragraph sees his ERA at that 4.70 mark, while James says 4.34, and Marcel 4.10. 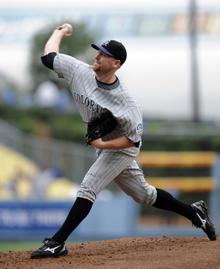