Lost in Translation - Is Francis joining Team Canada after all?

Share All sharing options for: Lost in Translation - Is Francis joining Team Canada after all?

Despite Jeff Francis reportedly being ineligible according to a blog report from Troy Renck last month, apparently both the pitcher and Team Canada are preceding as if all things are go for the Rockies left-hander to participate in the WBC. 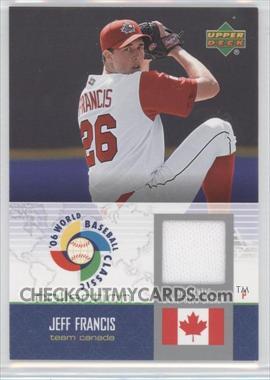 In a report focusing on whether Ryan Dempster or Rich Harden are going to enlist for our neighbors from up North, we get this blurb:

Jeff Francis is a go right now, although there are murmurs the Colorado Rockies aren't thrilled with the thought of their ace taking part again.

Given the reports we've heard this winter from Renck and others, I wonder if the Rockies even actually know about Jeff's intentions here. If Jeff is participating, he would join what's turning out to be a pretty healthy list of Rockies in the event.

As Russ mentions in a comment, Jack Etkin in a blog post disputes the Canadian Press report linked above for the same reasons Renck does, that is, Francis would be inelligible to play in the WBC after being inactive at the end of the 2008 season.