This Day Belongs to the Colorado Rockies

Share All sharing options for: This Day Belongs to the Colorado Rockies

May 1 is called May Day.  I move that October 1 be called "Rocktober Day."

With the win today, the Rockies are just 4-5 on October 1, but look closer.  All five losses came from losing teams - all four wins came by virtue of winning teams.  More importantly, three of those wins represent the only three times this franchise has clinched a playoff berth.  All three clinches came on October 1 at Coors Field.  Really - it's Rocktober Day.

To celebrate, let's look back at revel in the glory of the first time the Rockies played out their playoff-clinching scenario:

2007 wasn't the first time that Colorado punched their ticket for the postseason on season's final day .  Don Baylor's club entered the day 14 years ago with a one game lead over the Houston Astros for the inaugural wild card spot in the National League.  That one game lead was unchanged for the six final anxious days.

In clinching day, the Rockies needed an ace.  Fortunately, they had Bret Saberhagen, the franchise's first big-time trade deadline acquisition..  Saberhagen was a proven big-game pitcher: in 1985, he won 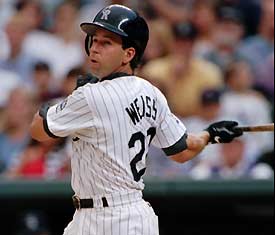 Game 7 of the World Series for the Kansas City Royals as a 21-year-old, the same season he became the youngest pitcher to ever win a Cy Young.

But Rox fans certainly don't remember Saberhagen in Cy Young regard.  The 31-year-old right-hander went 2-1 in nine starts with the Rockies, posting a 6.28 ERA and allowing eight home runs.  His stay with the Rockies was unfortunately punctuated by the game exactly fourteen years ago.

Matt Williams and J.R. Phillips homered of Sabes in the first two innings, though sac flies by Dante Bichette and Vinny Castilla kept the game close at 3-2 heading into the third.  But after a single, two doubles, a Walt Weiss error and a walk, Saberhagen's day was done.  Mark Thompson came on and allowed two sacrifice flies but stopped the bleeding.  Heading to the bottom of the third, the Rockies were trailing 8-2 and had a 10% chance of winning the game.

The details of the Rockies' first improbable-comeback-to-clinch-a-playoff-birth can be found under the fold.

Three things were in the Rockies favor for a comeback.  One:  Coors Field circa 1995.  Two:  they were facing Joe Rosselli, who was making his fifth and final career start.  Three:  the bullpen (Thompson, Lance Painter, Bryan Rekar, Bruce Ruffin, Darren Holmes and Curtis Leskanic) combined to throw seven innings, allowing just one run on six hits.

Don Baylor's club got down to business quickly in the third.  Mark Thompson and Joe Girardi each singled in front of Eric Young and Larry Walker home runs.  The four runs pulled them within two, injecting life back into a deflated crowd.  That deficit held until the fifth when doubles from Joe Girardi, Andres Galarraga and Walt Weiss in conjuction with singles from Dante Bichette and Larry Walker gave the Rox a two run lead.

Houston had a habit of shadowing the Rockies the previous five days.  Their own acclaimed right hander, Doug Drabek, likewise put the Astros in a six run hole early.  At roughly the same time the Rockies completed their comeback, Terry Collins' club tied their game at six in Wrigley in the fifth inning.  Houston went on to win the game, but luckily, the Rockies' bullpen made sure that game was moot.

Don Baylor called upon Curtis Leskanic to close the one-run lead.  In the biggest inning in franchise history to that point, Leskanic struck out J.R. Phillips and Tom Lampkin on eight pitches before allowing a single to current Rockies' first base coach Glenallen Hill.  Then, with 48,069 fans standing and screaming, Leskanic induced a groundout by Jeff Reed to Andres Galarraga.

The Rockies went on to lose the NLDS against the Braves three games to one, but that game and season changed baseball in the Rocky Mountains for good.  By making the playoffs in just their third season of existence, the Rockies became the fastest MLB team to reach the postseason.  The Blake Street Bombers converged in full swing that year, helping to clinch a playoff berth at Coors Field in its maiden season.  In addition, at the ripe age of 9, my fandom of the Rockies and baseball was officially forged that day.