Share All sharing options for: Cook stellar as Rockies clinch playoff spot, team's patience shines through in season and game

So here's more about the game, here are some key takeaways, 3 up, 3 down style:

A little about the playoff scenarios, the day's rather undramatic FanGraph, and the Roll Call after the jump.

First of all, nothing short of a road sweep over the team with currently the best record in the National League (not to mention one which we currently sport a 3-12 record against on the season) will get the Rockies a lot better than the wild card, let's not pretend that will be easy or even likely. That said though, there are some scenarios that could mean Denver sees more of Rocktober than usual if it does happen.

As things stand now, the Rockies are two games behind Los Angeles, 1.5 games in back of Philadelphia, and even with St. Louis when it comes to the best record in the National League. The Phillies get the Marlins at home while the Cardinals meet up with this Brewers squad that the Rockies just swept at Busch Stadium. The Cardinals are more or less a moot issue in terms of how they finish, if the Rockies sweep the Dodgers, the best they can do is stay even with Colorado and they'd lose the head to head tiebreaker. Philadelphia, on the other hand, would need to lose three out of their last four (including the game underway to the Astros tonight) to fall behind the Rockies, or else Colorado loses in tiebreakers with them.

One of the more interesting scenarios involves a three way tie between the Rockies, Phillies and Cardinals for the NL's best record at 94-68, in which case, the Phillies would have the home field advantage throughout the playoffs by virtue of their 8-3 record against the other two teams (the Rockies were 8-5), but would draw Los Angeles as a wild card opponent. The Rockies in that scenario would have the home field advantage over the Cardinals in the NLDS and possibly the Dodgers if Los Angeles could win their series against Philly.The most likely wild card scenario still suggests that the Rockies would have to play Philadelphia, and cede the home field advantage to them, as they hold a similarly dominant record over the Cardinals this season that we have, meaning St. Louis would either actually have to sweep Milwaukee or the Phillies get swept by the Marlins for the Cardinals to move ahead. 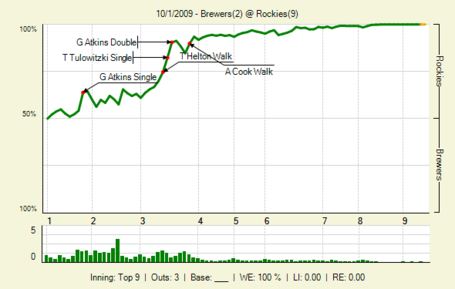