Phillies push Rockies to brink of elimination with 6-5 win

Share All sharing options for: Phillies push Rockies to brink of elimination with 6-5 win

Sunday night was a game two teams wanted, but only one could have, and after a heavyweight slugfest, it was the Philadelphia Phillies that came out on top with a 6-5 victory over the Colorado Rockies, taking a 2-1 series lead in the best of five and putting the Rockies in a must win situation for Monday.

Philadelphia drew first blood off Jason Hammel with a Chase Utley solo home run in the first inning. The Rockies also jumped on J.A. Happ early, racking up 35 pitches seen against the left hander in the first inning in the process of scoring two runs on singles by Carlos Gonzalez, Dexter Fowler, Troy Tulowitzki, Garrett Atkins and an RBI groundout from Todd Helton. In the third they added one more run on another Atkins hit, this time a two out double.

After Hammel settled down through the rest of the Phillies lineup the first time through, he ran into serious trouble the second time around and gave the lead back to Philadelphia with a three run fourth. Carlos Gonzalez answered with a solo home run to tie it in the bottom of the inning, and the two teams exchanged runs in the sixth and seventh, respectively. Rafael Betancourt got out of a difficult jam in the top of the eighth after Raul Ibanez walked and Pedro Feliz hit a bloop double to left field with one out. Betancourt struck out Carlos Ruiz, who already had two hits and two RBI and pinch hitter Matt Stairs to end the threat.

The ninth, however, proved to be the Rockies undoing, as Huston Street gave up a single up the middle to Jimmy Rollins, saw him sacrificed to second on a Shane Victorino bunt, and then moved to third when a little dink back to the mound by Chase Utley proved problematic for Street. Utley was called safe at first with a single, and a deep fly out by Ryan Howard was able to score Rollins.

The Rockies final at bat against Brad Lidge saw Brad Hawpe ground out quickly for the first out. Gonzalez walked to get the tying run on board. Gonzalez stole second but Jason Giambi, pinch hitting for Fowler, popped out foul to the third base side. Todd Helton then worked another walk bringing Tulowitzki to the plate with runners on first and second. Tulo, though,  flied out to Raul Ibanez to finish the game.

The Rockies failures in run prevention were largely due to the eight walks they allowed, three to Ibanez alone, and an inability to get through any portion of the Phillies order cleanly. The Rockies offense, for its part, had several scoring chances that could have seen better results but holes in the lineup prevented them from getting an extended rally going. The pitcher's ninth slot was the only one to not get either a hit or walk for Philadelphia, while Colorado had three slots that proved to be automatic outs, with Yorvit Torrealba, batting fifth, and Clint Barmes, batting eighth, joining the ninth slot as unproductive on the night.

Now trailing the series 2-1, the Rockies are faced with the difficult task of having to win both tomorrow at Coors Field and Tuesday in Philadelphia if they want to advance to the NLCS. They will be relying on their ace Ubaldo Jimenez for the next game, but Philly will counter with their own number one, Cliff Lee. 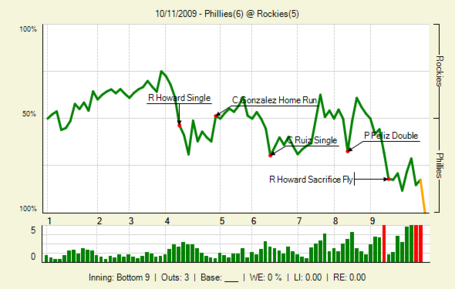