Rockies 4, Phillies 5: Rocktober ends before it ever really began

Share All sharing options for: Rockies 4, Phillies 5: Rocktober ends before it ever really began

I wish I had something profound to say about all of this--I don't. Until the eighth inning of the game, it was disappointing that the Rockies were about to be eliminated. But then Jason Giambi and Yorvit Torrealba gave the Rockies a breath of life, giving them a lead. Yet, it was all too fragile. Huston Street blew the save, breaking the hearts of Rockies fans everywhere. And now, it's all just numb. I don't feel anything. It just is.

Thanks to everyone for a great season in the game threads. We struggled with the Rockies for the first two months, cautiously waited to see what would happen with Jim Tracy, kept on chugging with the Rockies as they turned their season around, marched with them to the playoffs, and experienced the pain of watching Rocktober fizzle. In the end we did it as a community of Rockies fans. Purple Row is a product of what every member of the community brings to it. Thank you.

Join me after the jump for the usual. 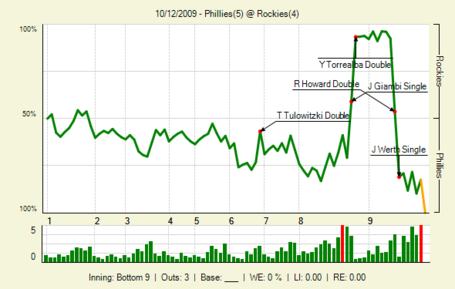