Tuesday Rockpile: Thanks for a great season, Rockies

Share All sharing options for: Tuesday Rockpile: Thanks for a great season, Rockies

I don't even know where to start.  One thing is for sure though:  despite the both premature and surprisingly late end to the Rocktober season last night, this 2009 Rockies team deserves to be celebrated.  After the toughest game I have ever witnessed, muzia02, I, and a handful of others fought back tears to stand and applaud the Rockies as they walked off the field.  They deserved it.  What an incredible ride 2009 was.  And my, how bright the future is.  We finally got a glimpse of it last night.

As is often the case, Drew Litton depicts it better than anyone. 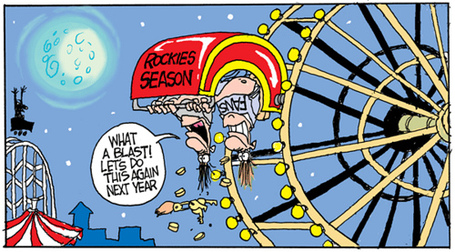 We'll be reflecting back upon this season a lot throughout the offseason, but I found myself unwilling to let go of this team last night, like I was a woman at her lover's premature funeral.  I poured through the Purple Row archives, and I urge you all to remember everywhere this team has been.

April 27:  Dexter Fowler steals 5 bases in 12-7 victory over Padres
That's two in a row after the Rockies defeated the Padres 12-7 tonight.

May 29:  Torrealba and Marquis lead patient Rockies to win in Tracy's first game as Rockies manager
The Rockies used a patient approach that Clint Hurdle couldn't draw out to defeat the Padres on Friday night, winning Jim Tracy's managerial debut for the club.

June 14:  Rockies Make it 11 Straight Victories: Rockies 7, Mariners 1
This one does indeed go to eleven.

June 20:  Rockies 9, Pirates 7: DID I JUST SEE THAT?! Rockies clinch another series
The Rockies win again, this time in the most dramatic fashion of the season.

More high times, low times, and all the news that's fit to click after the jump.

October 1:  Cook stellar as Rockies clinch playoff spot, team's patience shines through in season and game
The telling stat from the Rockies playoff clinching win on Thursday might have been the sheer volume of pitches they saw.

April 25:  Dodgers 6, Rockies 5: Time to Pull Your Hair Out
The Rockies lose 6-5 - again - after another poor outing by Ubaldo Jimenez.

May 16:  Critique of Pure Reason: sometimes Rockies just Kant win
The Rockies were meant to lose to Pittsburgh on Saturday night, or maybe they weren't, but how could we possibly know that from our experience?

May 17:  A Treatise on the Sufferings Wrought by the Rockies on Rox Girl and a Manifesto of what has to be changed.Rox Girl has had enough.

May 25:  Memorial Day Massacre: Dodgers 16, Rockies 6
The Rockies let the Dodgers win in a bloodbath, giving up seven runs in the fourth inning, eight in the seventh in a loss on Monday afternoon.

August 30:  Giants 9, Rockies 5: Bullpen hands San Francisco share of wild card lead - Purple Row
Colorado is tied for the wild card lead, but it's not so exciting how it happened this time

The Denver Post has an impressive assortment of articles by a slew of writers about last night and the entire season.  My numbness and lack of time don't allow me to read everything yet, but here it is.

Rockies, fans stunned in Phillies comeback - The Denver Post
John Ingold knows how to to bring on the tears.  He just pulled the kid card:

"Eleven-year-old Mark Auger gazed dejectedly down at the suddenly empty baseball diamond, then took the inside-out rally cap off his head and flipped it back outside-out.

Wild Mood Swings: Phillies 5, Rockies 4 - The Good Phight
Stomachs churned, fists pumped and voices went as the Phillies took a thrilling 5-4 win over the Rockies to close out the National League Division Series in four games.

Inside the Colorado Rockies " Street Suffers A Bitter Loss | Major League Baseball in Denver I love Huston Street.  He absolutely must come back as the Rockies' closer next year.

Kiszla: Weight of world tough to bear for Rockies' Street - The Denver Post

BtB Power Rankings: End of 2009 Season Data - Beyond the Box Score
For those sabermetrically inclined, the Rockies finished 4th in MLB in JinAZ's final season power rankings, behind the Yankees, Rays and Red Sox.  Yes, there's no NL team in there.

We'll have plenty of time to banter about the future.  Let's give this team the applause it deserved.  It was a heck of a ride.