Monday night I quietly rode the AF bus home from the Market Street station, listening to a couple people casually talking about the game, mispronouncing names and referring to critical players as "that guy" or "that one player who hit it". At this point, I'm rolling my eyes, but I'm not going to interject them and tell them what was really up. I've been doing that all season. I'm the Rockies guy. Everyone asks me about trades, the roster, "what's up with the pitching?" etc. In fact, after Game 1 in Philly, I showed up to a class for my Master's program about 10 minutes late, and the professor said, "I'm so sorry". No admonishment, no note of late attendance, but rather sympathy.

No, the season is over. I'm not the Rockies guy tonight. I'll let them have their conversation without bothering them. Instead, I just clicked on the light on up above me and went back to my book, "The Soul of Baseball: A Road Trip through Buck O'Neil's America". It's a nice, quiet book about Buck O'Neil's experiences in baseball, and his experiences as an African-American living in the US during the time when he played baseball. It's a good book to ease a heart aching from a long season cut too short.

I woke up Tuesday morning and it was one of the first really dark mornings we've had this fall. I wondered what time it was, if I'd woken up too early, etc. I showered, ate, dressed, and headed out to my car, and the sky was dark and overcast, gloomy, unhappy, ready for winter. It's kind of amusing how the weather and the season coincided: an overcast gloomy morning, no sun in sight, and Rockies baseball has ended for the year.

It does sort of feel like our joy has left, the team and sport that get us all excited and giddy every summer, the sport that makes me suddenly get all snobbish to other sports fans. Now it's done, I feel like the guy in that Colorado state lottery ad, where he's at Invesco, and the Raiders fans make him go up top, and he sits down all dejectedly and defeated. That's how I feel right now, like I have to give up and go to the Pepsi Center or Invesco or something and slump down into a box seat to try and root for teams I really don't care about anymore (the Avs are somewhat an exception: I half-care about them) and join the teeming masses who just don't GET why I'm kind of bummed out now, they're just ready to go root for another Denver team who's winning at the moment.

But it isn't the same, the Broncos, the Avs, the Nuggets - they're not the Rockies. The Broncos, Nuggets, Avs - they seem to be built on hype, on loud noises, on good will from championships past. Sure, we had 2007, but how much of the bandwagon dissipated as the festering horde of Red Sox fans crowded the seats around home plate chanting "RE-SIGN LOWELL! RE-SIGN LOWELL!"?

More past the jump

Such a contrast from 2007. (As I'm typing this, The Way I Are by Timbaland just came up on my iPod.) Atkins is a shadow of his former self, Hawpe sat, Fogg watched, and Jamey Carroll is whiling the days away in Cleveland.

Instead, we have the future of Colorado Outfield Dominance in Gonzalez, a raw but intriguing Fowler, and a gem of a quiet star in Seth Smith, not to mention hope for Ian Stewart. The bullpen today is filled with strikeout artists and specialists, a pitcher for every situation. The bench features 2007 starters and Jason Giambi. It's more complete, deeper, and more dangerous.

We need to be ready to move on. Rocktober is going to be our gimmick for decades to come, but the Rocktober crew has more or less headed down the trail. This new generation of players is here, and these are the guys that are going to carry us to glory.

The thing is, the 2009 postseason, for me, wasn't Rocktober. I mean, sure, that's what all the signs and the newspapers and the towels and street signs said, that it was Rocktober, but this really wasn't Rocktober to me. To me, Rocktober was the absolute magic and heart and gumption and whatever forces of nature and the supernatural shoved us through the month of September and caused us to sweep our way to the World Series.

Rocktober was the first time in years that Rockies fans could watch a game any given day and expect to win, rather than simply hope and then be surprised. Rocktober was the little guy finally fighting back. Rocktober wasn't sustained success, that's just the Rockies. Rocktober was this club bursting into a scene where we didn't belong and saying "Hey, you'd best watch out, because we're coming".

Rocktober was the proof that O'Dowd's plan worked. A nearly homegrown roster catching absolute fire and sweeping their way to the World Series. Rocktober was about the first wave of guys who really weren't supposed to make it, who would need one revision to bring up the Fowlers and the Stewarts and Jimenezes. Then we'd make it. This was the roster that played so well for about half the season to make up for a poor beginning, and then finding themselves behind the pack, ignited everything they had left and inexplicably kept on winning.

Rocktober was a garbage sac fly in the 13th inning. Rocktober was a slapped pinch-hit single through the 1B hole by a power hitting bench player to score a runner from 3B. Rocktober was a 3-run shot in pouring October rain. Rocktober was a headfirst slide. Rocktober was "they just...don't...lose" and they didn't. It was a team from the moon who had just installed a humidor who played world-class defense and nobody knew much else about them. A Canadian soft-tossing southpaw, 2 rookies, and a Dragon Slayer who seemed to find the W against the cream of the competition. Superstition, speed, camaraderie, controversy: that's Rocktober.

"But the Rockies are in the postseason - isn't that Rocktober?" Well, I guess it can be. When the jumbotron is coaching the fans to cheer "ROCK...TOBER" to loud beats, it feels as if the people in marketing grabbed the creative nickname that seemed to materialize from excitement alone in 2007 and now they're flooding the Denver sports market with this slogan as if this were an election year for a postseason berth. Whatever happened to "GO...ROCKIES"?

2007 was a magical season. 2009 was a deserved season. But it almost seemed as if those in charge were working to make 2009 reclaim the magic of 2007. Atkins at 3B. Yorvy behind the plate. Morales in the bullpen.

But it's just not the same. Holliday was Bucknering up another series. Francis and Corpas were on the DL. Kaz Matsui was golfing. That magic just wasn't there, and it's the kind of magic you just can't recreate, no matter how many towels you hand out and no matter how many places you paste the word Rocktober around town.

I'm not really advocating that the slogan Rocktober not be used anymore. I'm not. It's fun. It's a word the nation recognizes and Denver rallies around. But clinching the playoffs 3 days out and having meaningless games (relative to a postseason berth) takes some of the fire out, the momentum. No, friends, what we saw in October of 2009 was the Colorado Rockies. Not Rocktober. The Rockies who lost in 4 were the Real Deal. We got there legitimately, and we were beaten legitimately.

It sounds trite, but this is what real teams do. They work hard, they play hard, they win some, they lose some. We just had the best season in franchise history, the pitching staff we've been dreaming of for years, where our #5 was actually our #5, and not our #2. A legitimate closer, despite his late collapse. Midseason trades that fortified the roster this year, not next year. Desperation moves to keep the rotation in order and keep us winning. This team played and was run like a real team is, a winning team. This wasn't Rocktober.

No, Rocktober is a thing of legend. Something to tell your kids about, how a team of young players with a few mixed-in veterans, some bordering on washed up already, some just starting their careers. rookies, journeymen, and a man whose mother petitioned God for a win. That's Rocktober. It made a splash, made us an anomaly that could improbably resurrect and inexplicably win. Now we're a team poised to remain a yearly threat to play again.

So what do I call this? This thing our team is now?

I call it successful.

It's Tuesday afternoon now. I just boarded the AF bus, not 24 hours after the loss. I rode the mall ride, and without surprise, I saw roughly zero people wearing Rockies gear, about as much as I'd expect to see any day. As the AF emerges from the Market Street Station's underground garage, I glance out the window. The light poles have CU Football banners on them, and the town is back to regular downtown colors, no longer a purple festival.

I crack open my book to spend a bit of time learning about how much Buck O'Neil loved Jazz music. The bus rumbles past a few shaded buildings, and we approach Auraria Parkway. As I look back toward Coors Field, I squint a bit at the reflected glare off of a street sign, and lower my sunglasses off of my forehead over my eyes.

It's just too bright out there. 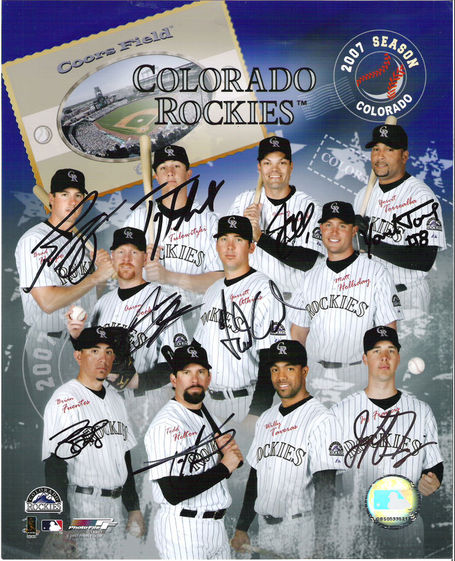