Rockies beat Dodgers, claw within one game of division lead with two left to play.

Share All sharing options for: Rockies beat Dodgers, claw within one game of division lead with two left to play.

The last time the Rockies were this close to the Los Angeles Dodgers, they were 3-3 and half a game back after losing to the Phillies on April 12. Now, 154 games later, after both teams have already secured at least a playoff berth, Colorado has closed the gap back to one game and with two more wins in this series could secure their first division crown in franchise history.

Ubaldo Jimenez had a dominant start outside of one wild and erratic third inning that saw him give up a run off of three walks and a wild pitch. He'd find his groove again, however and finish with ten strikeouts and just two hits allowed in six innings of work.

For the Rockies offense, Yorvit Torrealba got the party started with a two run bases loaded double in the first inning as the Rockies got to Dodgers starter Randy Wolf before he could settle in. Troy Tulowitzki later clubbed a two run home run after Wolf left in the sixth inning to give the Rockies the cushion they'd need to withstand the Dodgers comeback off the bullpen.

Matt Daley allowed a solo home run to Russell Martin in seventh and Andre Ethier blooped a single off of Joe Beimel later in the same inning to score the Dodgers third run, but Rafael Betancourt came in and struck out Manny Ramirez to end the Dodgers threat. In the eighth, Betancourt and Huston Street continued to shut down the Los Angeles lineup as the Dodgers 'pen did the same for the last three innings against the Rockies. Street closed the door for good in the ninth, as the Rockies won their fifth in a row.

With the Cardinals and Phillies both losing, the door for Colorado to get home field advantage in the playoffs opened a little wider as well, but sweeping the Dodgers is a prerequisite for that. FanGraph and Rollcall after the bump. 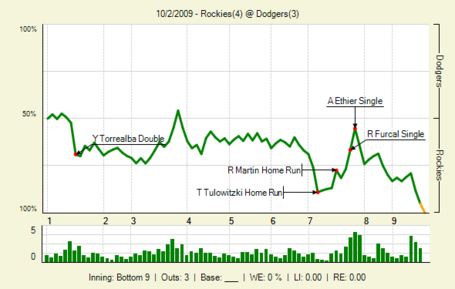