Baseball is still being played out there somewhere, but for the Rockies, it is sadly the offseason.  Before the hot stove really heats up and we start looking forward to 2010, I thought I would run a series reflecting on the great season 2009 was.

Over the next three months or so, I will be breaking down each of the five teams, position-by-position, starting today with first base.  The series will be comparable to what Brendan Scolari did for TrueBlueLA before the season, although it will be using actual performance rather than projections.

These articles will indeed utilize WAR heavily.  I understand SABR stats have been contentious around here lately; however, if you're one of those fans who thinks "who cares?" to wOBA and WAR, don't just tune this all out.  I have included all traditional statistics as well, so you are welcome to take or leave any information presented as desired.

Positional splits for traditional statistics can be found anywhere.  However, value statistics like WAR and wRAA are not broken down anywhere for each player's ABs by position (at least that I have found). Thus, I had to compute them on my own so that, for instance, only Garrett Atkins' ABs as a 1B count here.  The methods for doing this are clearly outlined by Purple Row's own Jabberwocky right here.

UPDATE:  After posting, many noted that the PA's I reported from Fangraphs were inconsistent.  After contacting David Appelman, I confirmed that those PA's represent PA in games where the player played first base at one time, not necessarily at the time of the PA.  I reworked everything from the Baseball-Reference database.

In addition, I reworked the park factors.  Instead of utilizing an assumed universal linear weight, I used Statcorner's component factor for each offensive event for home games (I assumed away games yielded a net neutral effect).  This is not how Fangraphs does park effects pertaining to WAR, so their numbers will look different.  Appelman told me they will have value position splits this offseason, perhaps by February, in time for this series to be over.  Note that these numbers are not perfect.   They are best used for window-shopping comparison rather than hard evidence.

First base is a classic premium offense position, but the 25 men that played first base this season in the division are collectively uninspiring (save a couple).  Brendan Scolari's projections had the Padres finishing first, followed by the Rockies, Dodgers, Diamondbacks and Giants.  Here's how the five teams shook out in 2009 (wOBA* is my park-adjusted wOBA):

Aside from Arizona's complete collapse, we saw essentially what was expected.  On the strength of Adrian Gonzalez' stellar season, the Padres trounced the rest of the division at first base.  Pablo Sandoval's offense and Travis Ishikawa's glove (worth one whole win?) almost pushed the Giants past Los Angeles, but not quite.

The Diamondbacks utilized eight different men at first, with only Mark Reynolds capable of hitting north of .222.   It isn't surprising then that the Diamondbacks were collectively below replacement value at first base.  That's right - they could have perhaps gotten more production at first had they signed Joe Koshansky out of spring training and given him the job.

For a graphical comparison, here are the five teams plotted by component RAR (Runs Above Replacement, or WAR times 10). 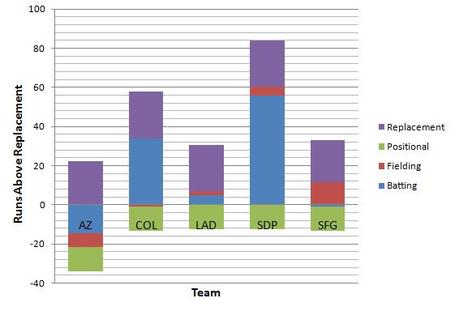 Since we are comparing only first base, every team as a positional RAR of -12.5.  Replacement is essentially the same for each team, just slightly varied, as it is defined as 20/600*PA.  The definition is explained here.

For a closer look at each team and each player, take the jump.

Instead of posting the entire database of all 25 first baseman, here are the top and bottom five:

Of all qualifying players (arbitrarily chosen as 100 PA), the high is in bold and the low is in italics.  The full table and accompanying calculated spreadsheet can be found here in Google Docs.  If anyone wants the Excel file to view derivations, you may email me.

After getting the PA right, Pablo Sandoval's contribution lessened to a more understandable fifth in the division, and Garrett Atkins turned out to not be such a deadweight after all, though he is ranked 15th.  Part of that was due to a generous defensive score, which did not help Jeff Baker out.

Provided the Padres don't sell off A-Gone (and he doesn't want to be traded), the top two teams and the top two players will return in the same role next season.  The Dodgers will continue with James Loney in hopes that his bat wil return to 2006/07 form after a two season hiatus.

Arizona looks like they will try to groom 2009 rookie Brandon Allen, though a dark horse could be Conor Jackson.  He was terrible this season before catching Valley Fever - if he is retained, he could be insurance for Allen after the emergence of Gerardo Parra in left field.  The Giants will bring back Travis Ishikawa and Ryan Garko so that Bruce Bochy can find a way to ineffectively use them.

Next week, I'll move on to second base.  Where will Clint Barmes and his 23 home runs land?