It was a nice dream while it lasted, but the Rockies' fairy-tale hopes for the end of the season imploded in Hollywood tonight.  Had Colorado won tonight and tomorrow, they would have secured the NL West title and home field advantage throughout the National League playoffs.  Instead with the loss, the Rockies will be the NL Wild Card and will open their NLDS Wednesday in Philadelphia.  First, they'll play a meaningless game tomorrow for the first time in 162 regular season games.

With Matt Daley unavailable from a 28-pitch outing last night, Jim Tracy turned to Franklin Morales in a scoreless game in the bottom of the seventh. Casey Blake singled to left-center field, where Carlos Gonzalez bobbled the ball for an error, allowing Blake to advance to second base.  That error completely changed the complexion of the inning.

After a sac bunt moved Blake to third, Ronnie Belliard pinch-hit for Orlando Hudson (who saw that coming in May) and poked an infield single in the hole between first and second.  Clearly unnerved, Morales went on to walk two - one intentionally - and give up run scoring hits to Mark Loretta and Juan Pierre in an inning where the Rockies phones to the bullpen mysteriously ceased functioning.

Morales' final line was ugly - 0.1 IP, 5 ER, 4 hits, 2 BB, raising his season ERA to 4.50.  He has been unquestionably uneven of late, but he remains a weapon that Jim Tracy cannot draw from elsewhere.  He will/needs to be on the playoff roster.

Also of note:  this was just the 3rd time in 38 relief appearances that Morales has permitted multiple runs.  That's 7.89% of his appearances.  For comparison, Huston Street has been guilty of that offense 7.81% of his outings this year.  I know Morales has been frustrating, but we'll need him - we can just hope he can get his head on straight.

Dominance From the Start

After six days of Los Angeles playing with the composure akin to a roster filled with September call-ups, it was their youngest member that finally showed up to play.

Clayton Kershaw, 21, pitched six sterling shutout innings, striking out ten and allowing just three singles.  He retired the first 11 Rockies hitters, nine by strikeout, before Todd Helton pulled a single to right in the fifth to break up a perfect game.

Jorge De la Rosa was up to the task though, as he retired all nine batters he faced, four by strikeout, before leaving two pitches into the fourth with an apparent right groin strain, ruining his bid to tie the Rockies record for wins in a season

The Rockies' lefty had thrown just 40 pitches, and his absence cannot be understated. Jose Contreras deserves a pat on the back for throwing three scoreless innings around traffic, but the way de la Rosa was throwing, Franklin Morales would have never seen the field.  In a season where injuries have largely left the Rockies rotation alone, it's unfortunate that minor groin tightness at the eleventh hour ended the Rockies hopes.

Oh well. I can’t bring myself to be too too upset, especially considering a week ago we didn’t even think we’d be in this position.

I think I might be more upset about not being able to see what Jorge could have done had he stayed in, than I am the game itself.

I'll second everything holly96, but I'll add this:  the Rockies have had an epic run, they remain the hottest playoff team in the National League, and though Colorado will face a scary southpaw triumvirate without homefield, the Phillies will have a tough series on their hands.

Join after the jump for the fangraph and the row call. 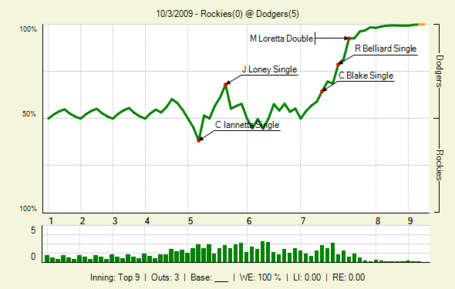