Share All sharing options for: Rockies End 2009 Regular Season with 5-3 Loss to Dodgers

It was a game that had the atmosphere of March, not October. An assortment of regulars and scrubs played out the string on the 2009 regular season in a meaningless game 162. The Rockies fell to 92-70 (two games behind LA in the NL West), which is still their greatest record ever, and will play the Philadelphia Phillies on the road in the NLDS starting Wednesday at 12:37 MDT. Game 2 will be Thursday at 12:37 and Game 3 at Coors Field will be at 7:37.

Jason Marquis (15-13) had a rough go of it, giving up four runs in the first inning to LA's scrubs. In all, he went four innings, giving up eight hits and three walks. Six relievers (including two innings from Jason Hammel) combined to allow only one run the rest of the way.

On the other side of the coin, Vicente Padilla (12-6, 4-0 in NL) pitched very well for the Dodgers, striking out 10 Rockies in five innings. In all, Colorado struck out a staggering 17 times in the game (12 by the first five hitters in the lineup). They did manage eight hits (including Brad Hawpe's 23rd home run and Dexter Fowler's 10th triple) and even made it interesting in the ninth before falling short. 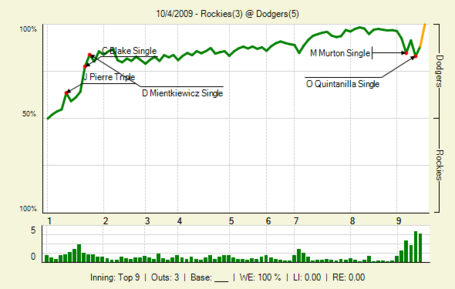