A playoff series deserves more attention than a regular season series.  For that reason, I will be adding more information to my previews.  To make things easier to digest, it will be a three part series.  The first will be the ballpark.  Later today, the offense and defense.  Some time tomorrow, I'll post a scouting report on the Phillies pitchers, injuries and any other interesting information. 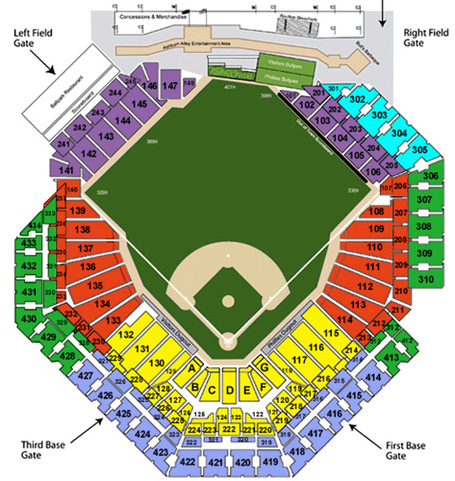 The Phillies' home park has a reputation of being a "Little League Field" due to the short porches and large numbers of home runs hit.  That reputation isn't a mirage, but it's not nearly as deserved as it has been suggested to be.

According to Baseball Reference, Citizens Bank has favored hitters, but only slightly.  As I did in August 31st's NL West Report, I have average the pitcher/hitter effects for simplicity.

Find the surprising context after the jump.

Following are all 16 National League parks and their Baseball Reference park factors, sorted first by the 2009 score, then by the multi-year score as a tie-breaker.

According the above table, Citizens Bank is just the 7th most offensive park in the National League (if one chooses to sort by the multi-year factor, they place fifth).  Sure, it provides some offensive support, but why then is it perceived as being such -time offensive park?

The reality is that home runs influence the perception of a park more than anything.  The Phillies have been in the top 3 in the NL in HR 6 of the 7 years playing at Citizens Bank, including first each of the last two seasons.  They finished with 34 more home runs than any other NL team this year.  Part of that is their supreme home run hitting talent, but it's also because it's the second best HR-hitting park in the league.  Here are the NL Parks sorted by their HR/FB factor, as shown at StatCorner:

It's no accident that the above table probably aligns more closely to the average fan's (and commentator's) perception of NL parks as hitting/pitching parks.  (Note:  Citi Field and Nationals Park are too new to be listed on StatCorner's park factor section).  So obviously, Citizens Bank Park is kind to home runs, but for it to be nearly neutral, it must favor pitchers for other events other than home runs.  That is indeed the case.  The following are Citizens Bank Park's park factors for twelve different offensive events:

For every other way of reaching base, CBP favors the pitcher.

Conclusion: Citizens Bank Park is indeed a hitter's park, but its potency is greatly exaggerated due to its admitted leniency for home runs.  The smothering effect it has on other offensive events lead it to be only slightly more of a hitter's park than average.

These black and white numbers are not perfect and should not be taken to be perfectly precise.  Decimals probably should not be included.  Their variance can be exhibited in the difference from some parks in 2009 related to their multi-year factors.  However, the factors are based on a great deal of empirical data, so the trends they exhibit are still representative of the physical effects we have seen.