As various Game 1's of the 2009 postseason draw near, Rockies fans find themselves in an interesting position: Watching 2 other teams have a play-in game for their playoff spot while already inside the gates of the postseason.

This is the second consecutive season where the Minnesota Twins have found themselves in a 1-game play in for the AL Central Division Title. Last season, Sox DH Jim Thome launched a solo shot off of Twins starter Nick Blackburn in the 7th inning which proved to be all the Sox needed, as starter John Danks pitched 8 innings of 2-hit ball, and closer Bobby Jenks pitched a scoreless 9th.

2 years ago, I hardly need remind anybody on THIS website, but just in case, Colorado rallied off of Padres closer Trevor Hoffman to win the NL Wild Card for just the second playoff berth in franchise history.

Other famous tiebreaker play-in games include the 3-game series in 1962 where the 103-win Los Angeles Dodgers were defeated by Don Larsen and the 102-win San Francisco Giants en route to an eventual 7-game loss to the New York Yankees, and a 1978 game not easily forgotten in the annals of baseball history thanks to one Yankee shortstop with a censored nickname. 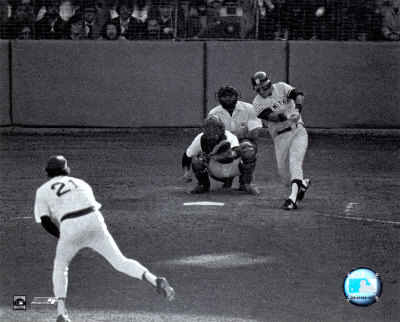 Feel free to discuss nostalgic baseball games while we're waiting to continue making our own history.

Meanwhile, back at the Mountain Ranch Club:

Rockies closer Huston Street revels in playoff atmosphere - The Denver Post
Boy, howdy are we glad we're in our situation and not in Philadelphia's. We have a solid setup man, closer, and while Franklin Morales may not be earning our love and favor recently, but he could still be the closer, you know. I know a lot of Santa-Claus-Booing, Battery-Throwing, Cheesesteak eaters who would love to be in our shoes in terms of back-end bullpen headcases. (For any Philly fans reading, I'm totally kidding about all that back there. I know you only throw change.)

Rockies Mailbag: Bring on the Phillies - The Denver Post
Troy Renck answers a few of the Rockies' faithful's questions regarding postseason eligibility, Dan O'Dowd's contract status, Ian Stewart's tough season, Eric Young Jr. 's baserunning troubles, and Troy Tulowitzki for Comeback Player of the Year. Why anyone asked for it for Tulo, I'll never know, but Todd Helton was far more deserving of it if it were to to a Rockies' player.

Krieger: Tough calls pressing in on Tracy - The Denver Post
Dave Krieger takes some time to talk about the Jason Marquis' role in the rotation, how to set the lineups, and pretty much everything we've been discussing ad nauseam since late last week.

Rockies' young hitters get into swing - The Denver Post

Jim Armstrong discusses Dexter Fowler and Carlos Gonzalez, the bright future ahead of them, and how versatile their play has been in getting the Rockies where they are now.

This Rocktober squad better than 2007 version - The Denver Post
Patrick Saunders examines the 2009 Rockies as compared to their 2007 counterparts and points out what's good, better, and ugly. Ok not ugly.

Click past the jump for some other MLB capsules.

Baseball's employment rate took a hit this week with the unsurprising firing of embattled Blue Jays GM J.P. Ricciardi, the unexpected firing of Padres longtime GM Kevin Towers and the shocking development that Marlins manager Fredi Gonzalez's job may not be completely safe.

Who Actually Had the Biggest Comeback in 2009? - Beyond the Box Score

BtBS busts out a little WAR loving to see whose 2 season swing merited them the Comeback Player of the Year award.

Not a lot of surprises as to who wins most of the awards here, but Fangraphs jumps the gun a bit and goes ahead and hands out their hardware before the postseason even begins.

The Giants had a few headlines today:

Giants exceeded expectations in '09 | SFGiants.com: News
The Giants' elimination from the postseason race, which became official Wednesday with Colorado's 10-5 victory over Milwaukee, did nothing to diminish the promise San Francisco showed while climbing into contention.

Free-agent-to-be Brad Penny enjoyed short stint with Giants - San Jose Mercury News
Penny enjoyed pitching on the West Coast again, and the Giants certainly enjoyed having him, despite not making the postseason.

Will Bruce Bochy and Brian Sabean be retained next season? - San Jose Mercury News
I certainly hope so. I mean, I'd hate to see Tim Lincecum lose his arm to bad managing, but whatever, I want to keep winning, too.

Tricky article. John Shea cleverly dodges around Bengie Molina's godawful OBP while he makes a case for Bengie to be listed among all-time Giants great backstops.

Molina and the Giants need each other

Ray Rotto has some fond memories of the past 3 years of Bengie the Backstop, and ponders where the Giants could ever possibly find a studly offensive catcher to replace Bengie.....HMMMMM...

I always find it a bit tacky to discuss FAs before the postseason is over.