The Rockies ran into a buzzsaw today, and it's name is Cliff Lee. The lefty starter for the Phillies was masterful today, proving that the Rockies still have trouble hitting southpaws. The Rockies couldn't crack Lee until the final inning. Carlos Gonzalez sandwiched in a single between outs by Dexter Fowler and Todd Helton. After moving to second on a wild pitch, Carlos Gonzalez scored on a Troy Tulowitzki double. And then Garrett Atkins struck out to end the game.

This game was close for the first four and half innings, but that fifth inning proved troublesome for Ubaldo Jimenez. It started with a walk and culminated with a Brad Hawpe fielding error. With the score 2-0, it wasn't that bad. However, if the fifth inning was only troublesome, the sixth inning was horrendous. Chase Utley singled and stole second to start the inning. Then with the powerful winds in Philly today, Ryan Howard launched a ball to left field that Carlos Gonzalez was ohsoclose to catching. Instead, he didn't make the catch and hit the wall. 3-0 Phillies. It got much worse as Jayson Werth tripled to center (with help from the wind) for the fourth run. After that, Tracy removed Jimenez from the game, having recorded no outs that inning. Joe Beimel allowed another run, though credited to Jimenez.

The pitching quartet of Beimel, Matt Daley, Franklin Morales, and Jason Marquis held the Phillies in check for the rest of the game.

Another storyline to this game was the blown and missed calls made by the umpires today. If you read through this SBNation.com StoryStream, you'll find evidence that will break your heart and likely make you bitter.

So the first game was a loss. The series is not over; we did not fall off of a cliff (oh, that's a bad pun) today. Did we realistically believe that the Rockies would take both game at CBP? I doubt it, and who doesn't want to see two NLDS games at Coors? It's time for the Rockies to squeeze out a win tomorrow with Aaron Cook on the mound and then take both games at Coors Field this weekend. 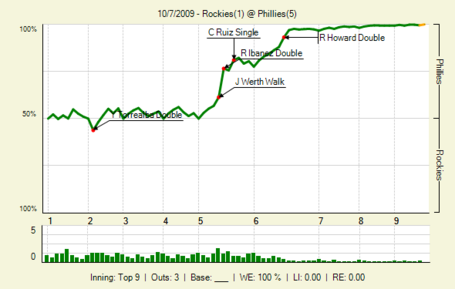