Share All sharing options for: NL West in Review:  Shortstops

This is about as suspenseful as a modern day cookie-cutter horror flick.  Not even our pudgy four-letter Philly fan can deny the proper anointment of the NL West's top shortstop in 2009.  However, it wasn't quite so clear just last March.
Coming off of a miserable 0.8 WAR season in 2008 (at the same level as Brian Barton and Carlos Gonzalez), Troy Tulowitzki silenced all critics in 2009, giving the Rockies a clear advantage over every team in the West.  In fact, the 6.85 WAR that Tulo, Barmes and Quintanilla generated represent the strongest infield position of any team in the division.
Even considering Tulo's down year, the preseason projections had the Rockies as clear favorites in the NL West, with Los Angeles, Arizona, San Francisco and San Diego following in order.  Colorado delivered in a big way, representing the division's sole above average offensive unit.  Everth Cabrera's surprising rookie season ruined what would have otherwise been an accurate ranking:

Shortstop was the most stable position among divisional infield positions, as all five teams had clear full-time starters from start to finish.   With the positional RAR set at +7.5, here is the graphical RAR representation: 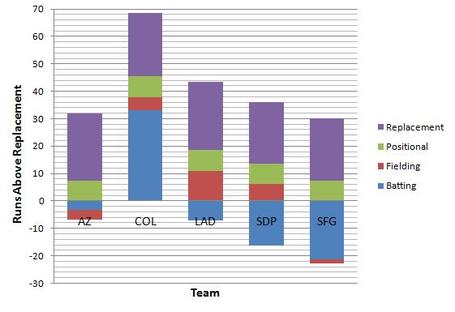 For the full rankings and team rundowns, turn the corner.

Seventeen different men manned shortstop, including Josh Wilson twice (for San Diego and Arizona), and all but five were above replacement level:

For a the full spreadsheet of the players rankings, team rankings and raw data, check this Google Docs link.

After a spectacular second half the previous season, the bright young shortstop took a huge nosedive with the bat this season, falling from a near elite shortstop to a below average league bat.  Sound familiar?  Augie Ojeda also performed well in 116 PA to usurp Renteria for the fifth most valuable shortstop in the division, just a tenth of a run behind Everth Cabrera for fourth.

Diamondbacks fans are hoping for a Tulowitzki-like bounce-back year in 2010 from Drew.  Arizona's 2004 first-round pick made $1.5mil last season and is up for arbitration.

Remember in May back when even Rowbots were drawing parallels between Tulo and Khalil Greene/Bobby Crosby?  I hardly do myself.  Four months later, Tulo finished the season as MLB's third-most valuable shortstop.  For some reason, UZR pegs Tulo as a below average MLB shortstop, which is clearly fishy.  That plus April/May make his season's ranking all the more incredible.  Clint Barmes was solid in in 49 PA, enough to finish seventh in the NL West despite no home runs and four RBIs.

Troy Tulowitzki made a paltry $1million in 2009, the second year of a six year contract.  He is guaranteed $3.5million next year, but hopefully, he'll cash in with more.  He'll pocket $25k each for a Gold Glove and All-Star appearance and $50k with a Silver Slugger.

Rafael Furcal was borderline MVP caliber to start 2008, but after an early summer injury, he never really recovered.  2009 started poorly as well, as Furcal hit below .250 for almost the entire first half.  The former Brave was saved by an 8.0 UZR - quite strange in that he was average or below average every year of his career up to 2009, and only Elvis Andrus was more valuable defensively.  I'm not sure I buy that.  Chin-Ling Hu, Blake DeWitt and Juan Castro washed out to about replacement level.

Furcal was a below average bat last season, not what Los Angeles was hoping for after signing him to a 3-year $30mil deal before the season.  He'll be making $8.5million next season, a value he has reached four of the last  five years (Fangraphs).  Still at 32, he could certainly regress.

Everth Cabrera was the full-time starter for the Padres at shortstop minus two months he missed with a fractured bone in his hand.  The Rule 5 pick impressed greatly with his bat after jumping from A-ball, with a park-adjusted .335 wOBA, comfortably above league average.  However, he struggled greatly defensively, as the Rockies saw first hand.  His UZR was worst in the division and fourth worst in MLB.  Luis Rodriguez was essentially the worst shortstop in the division who got any real number of ABs, but Chris Burke and the San Diego version of Josh Wilson join him as three of the five below replacement level contributors.

After an impressive rookie year, Bud Black will be writing Cabrera's name in his line-up card with great regularity. Everth should get a slight bump from the league minimum in 2010, but it won't be much.

Edgar Renteria's best days appear to be behind him.  The 34-year old Colombian was less than half as productive as his prior career-worst season.  His .288 wOBA is just pathetic - even Garrett Atkins was better, and he wasn't a defensive asset either.  Juan Uribe was solid as a backup, with Ryan Rohlinger and Kevin Frandsen also got some reps.

Edgar Renteria was one of the first signings last offseason, before the market crashed.  Consequently, his contract looks silly now, as he just finished the first year of a two year $18million contract.  Nine million of that will come in 2010, with an obvious $500k buyout to be exercised next offseason.  The option year in 2010 is for $10.5million.  If Renteria falters there more, the Giants could do a lot worse than using Juan Uribe there.