Before getting to the second base rankings, I thought I would touch on a peripheral discussion on the accuracy of WAR. It is important to understand that even the WAR found at Fangraphs isn't absolute. The methodology of chosen inputs can make the final numbers vary slightly, or in some cases, drastically. The best example of this is this year's season by Ricky Nolasco, who was a 4.0 WAR pitcher from Fangraphs, but just a 1.0 WAR pitcher via Rally's historical database. The quick explanation is that Fangraphs' input is FIP, while Rally's is more based on actual runs allowed and BABIP.

In my case, I'm using Statcorner's component park factors, while Fangraphs has their own methodology for park effects. That is why some of my numbers will vary some from Fangraphs' data. For instance, I have Orlando Hudson as a 2.52 WAR second baseman, while Fangraphs has him at 2.9 WAR. Which is right? I think it's a matter of preference.

A few weeks ago, Dave Cameron wrote an article entitled WAR: It Works, which defended their methodology by finding a 0.83 correlation between a team's total WAR and final record (for comparison, Pythageorean W-L has a 0.91 correlation). So it does a decent job, but there's some understandable noise in the data.

See the full methodology as explained last week. Last Monday, I omitted stolen bases and caught stealings from my value calculations. It turns out Fangraphs' positional splits are accurate to positional at-bats, and Baseball Reference's positional splits are not accurate for stolen bases and caught stealings. As it turns out, first basemen don't steal much, so that omission made practically no difference.

However, second basemen do tend employ the running game, so I did the extra legwork of utilizing ESPN.com's positional splits to extract SB/CS data. It didn't make a great deal of difference. Four teams saw their team wOBA* increase by .001, while the Rockies dropped by .001. Clint Barmes, who led all NL West 2B in caught stealings with nine, was the only prominent player to be affected, who dropped one slot in the rankings.

Read the results after the jump.

No NL West team had complete personnel consistency at second base, but that didn't stop Arizona from far surpassing the rest of the division with some surprise production from their second-sackers.

Brendan Scolari's calculations had Arizona projected to be the weakest team at second base this season, but the other four teams fell in line as expected from there.

Your graphical plot of the RAR for all five teams, with the positional RAR set at +2.5. 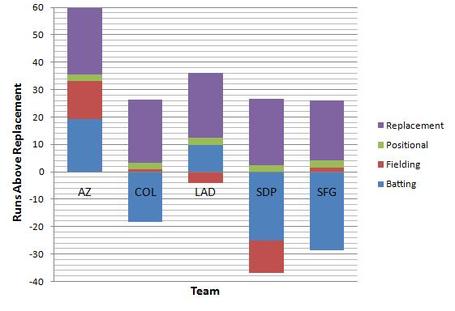 The second base position was exceedingly interesting, in my opinion. To wit: the most valuable player was also the fifth least valuable fielder; the worst and best fielders came from the same team; the man with the third most homers was the fourth worst second baseman; and, one team had four second basemen in the top seven in the division:

There were 27 total second basemen, and you can view the complete rankings and data here in Google Docs. Here are the top and bottom five:

Felipe Lopez barely played half a season for the Snakes, but his stellar first half offensively and plus glove defensively kept him in position to finish second best in the division. Ryan Roberts had the best rate stats of any divisional player with over 100 PA (he surpassed Clint Barmes for WAR when I added the SB/CS factor), and he was joined in the top seven by Augie Ojeda and Rusty Ryal, who led the entire team in wOBA in a small sample. All four players had positive UZR scores.

AJ Hinch will most likely choose either a starter from the pool of Ryan Roberts, Rusty Ryal and Tony Abreu going forward into next season. It is possible that an unnamed free agent would be thrown into the picture, but I personally don't expect it. The fact that the hands down best team at 2B in 2009 has such a question mark going into 2010 with only Lopez subtracted speaks to the relative weakness of the position in the NL West.

Clint Barmes had a heck of an enigmatic season. He was easily the most valuable defensive 2B and had more than twice the home runs of any other player. However, his Ryan Howard impression was completed by having a poor average and batting average, and he led the division in caught stealings, helping Roberts to surpass him. Ian Stewart was third in the division in home runs, but he posted the worst UZR by far, completely negating Barmes' defensive contributions, at least statistically. Omar Quintanilla contributed enough defensively to stay out of the bottom five despite a 2-for-28 mark with the bat.

Rumors abound that Dan O'Dowd is going to lock Barmes down to a multi-year contract, so it appears he will have the position locked down going into spring training, though Eric Young Jr could provide a completely different toolset.

Orlando Hudson had an All-Star first half, but his defense has slipped and Ronnie Belliard (who had a strong stretch in his own right by finishing8th in just 42 PA) of all people took starts from him down the stretch. Blake DeWitt, Juan Castro and Mark Loretta provided negligible negative value.

Hudson will be a Type A free agent and probably won't be retained by the Dodgers. By trading Tony Abreu for Jon Garland, Ned Colletti gave up his best internal option for the position going forward. There's no way they go with Loretta or Castro full time, and Blake DeWitt seems to have regressed after perhaps playing over his head in 2008. Los Angeles could go with Belliard, but second base is certainly on Colletti's offseason shopping list.

Grit is not an input for WAR, so almost all of David Eckstein's value goes unchecked. He combined his light hitting with the second worst UZR in the division. Oscar Salazar and Chris Burke played a small role, but Luis Rodriguez and Edgar Gonzalez really hurt the team, as both were in the bottom handful both with the bat and glove. As a team, the running game was essentially non-existent, as the Padres only stole four bases from second base. All five second basemen posted negative UZR scores.

Kevin Towers extended Eckstein through 2010 with a $1 million deal in August, so he is unequivocally the starter going forward, especially with signs pointing towards very minimal free agent spending this offseason

The position looked to be weak going into the season, and it was. Freddy Sanchez was unable to get on the field consistently after being acquired, but Juan Uribe picked up the slack by not only performing well (his wOBA* at second was just four points behind the best in the division for those with 100+ PA) but having a career season overall. Emmanuel Burriss and Eugenio Velez each got a well deserved Simon Cowell treatment for their poor auditions, and the team seemed that Kevin Frandsen is not the answer. The Giants' combined wOBA of .281 was by far the worst in the division.

As Rox Girl noted yesterday morning, the Giants signed Sanchez to a 2-year deal on Friday, paying him $6million/year, more than he's ever made in his career. On the surface, Sanchez is not much of a threat in the division, as he has regressed due to age in recent years and he dealt with a multitude of injuries of late. In 2008, he provided just $1.8million in value, and though he provided the Giants almost no value in 2009, he did have $10.1million total. And after seeing the terrible play at second and need to validate the Tim Alderson trade, it's no surprise Brian Sabean decided to go this direction. At any rate, barring injury to The Mole, the Giants will be much improved at second base in 2010.