Share All sharing options for: NL West in Review:  Catchers

Each of the past three years, the NL West has been home to an emerging and promising young catcher. In 2007, it was Russell Martin. In 2008 - it was Chris Iannetta's time to shine, and this season brought the surprising leap to prominence for Miguel Montero.
With Bengie Molina leaving in free agency, youth is served. Montero, Iannetta, Martin and Nick Hundley were all born the year before George Orwell's nightmare, and 22yo Buster Posey is waiting in the wings to take over soon. Of course, this article is meant to focus on 2009 though.
In past installments, the limitations of UZR have been illuminated, casting doubt on these numbers. So what could be worse than an inconsistent/inaccurate defensive metric? How about eliminating defense from consideration altogether. Fangraphs' WAR does just that for catchers, and given that I have been using their methodology, I was forced to as well. THT's Jeremy Greenhouse warns:

Do not place undue trust in WAR for catchers. How much of a catcher's value do you think is in his defense? I'll give you a hint: it's a lot. FanGraphs has unfortunately yet to give an effort to quantifying this vital aspect of the game, other than with the positional adjustment. In fact, catchers should possibly be considered a separate group of players with a separate replacement level and therefore be treated as different from all other position players.

Now, given that I have ruined the legitimacy of all ensuing data, let's look at the numbers.

The Diamondbacks rode the transformation of Montero from backup to cleanup hitter to the top of the division behind the dish. As noted above, defense is ignored in catcher WAR. With team replacement values and positional value essentially equivalent, offense is the only determining factor: 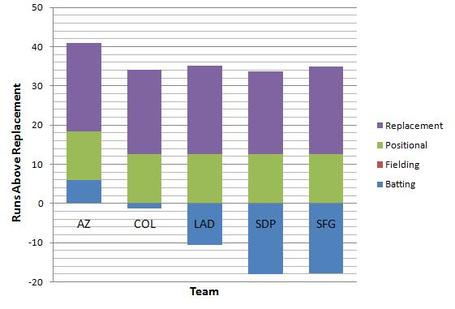 For the full rankings and team rundowns, click the words below.

As noted in the photo caption, only two of the 20 catchers (with 10+ PA) hit above the major league average wOBA.

For a the full spreadsheet of the players rankings, team rankings and raw data, check this Google Docs link.

Miguel Montero had seemingly improved from 2007 to 2008, yet the franchise still saw him as a backup prior to the season. Six months later, he finished second only to Brian McCann in wOBA amongst NL Catchers. What's more impressive than that the 26-year old left-handed hitter posted better numbers against LHP than RHP.

Chris Snyder was supposed to be the franchise's cornerstone behind the dish, as they signed him to a 3-year, $18.25mil contract last offseason, but an inconsistent year marked by injuries in addition to Montero's breakout has placed Snyder on the chopping block. The Venezuelan is eligible for an arbitration raise from his $425k 2008 salary.

Chris Iannetta was supposed to be a budding star for Colorado in 2009 - after all, he had a higher wOBA in 2008 than any MLB catcher with 300+PA. Greater than Brain McCann. Better than Joe Mauer. But any way you slice it, 2009 was a great disappointment for CDI. He trapped himself with an uppercut swing (his flyball %age was greater than 50%) and saw his batting average plummet. Yorvit Torrealba relieved him down the stretch and his bat lit fire in all the right times. Even with Iannetta's fall from grace, the duo were still one of the National League's best. Now if only they could throw out baserunners...

Iannetta will be the starter next season to begin with - even in a disappointing year, he posted the second best wOBA among NL West catchers, even considering park adjustments. Unless Torrealba takes a pay cut, he will be gone. It's doubtful the club would pursue anyone outside of recently re-signed Paul Phillips to be #20's backup, though AA catcher Michael McKenry, who was just protected from the Rule 5 draft, could take that role at some point this season.

Russell Martin was both the NL Silver Slugger and Gold Glover just two years ago at the age of 24. Two years later, his power has disappeared and his middle-of-the-order bat has dropped to well below league average. He didn't hit a home run until June 20 this year. His IsoP has dropped about 60 points in each of the last two years. What's the cause of this? My first guess is overuse, as he also has a notable drop in first half/second half IsoP in his career. Still, by logging 568 PA behind the dish, Martin accrued far more positional and replacement RAR than any catcher in the division, giving him a second place showing this season.

Los Angeles avoided arbitration with Martin last year by signing him to a one-year $3.5mil contract, a 780% increase from 2008. Even after by far the worst season of his career, he could earn up to $6mil in arbitration. Buster Olney has suggested that might make the Dodgers consider trading Martin in a sell-low move, but if Toronto bites for Martin in a Halladay package, it would be worth it. Unfortunately for the Dodgers, there wouldn't be much in terms of in house replacements for Martin. I doubt he will be traded, although the McCourt divorce wild card does a fair job of complicating things.

The Padres were the only team not to appear in the top five, though Nick Hundley and Henry Blanco finished sixth and seventh respectively. The two were essentially the same players offensively in 2009, with an average near .240, OBP in the .310's and slugging percentage at about .400. Eliezer Alfonzo was a complete deadweight replacement in his 107 PA though, and the team fell to the bottom of the pack.

San Diego is fine with their cheap youth movement, so the 26-year old Nick Hundley's job should be safe - he is under complete team control financially. Blanco, who I like a lot as a backup, is a free agent, as is Alfonzo.

Bengie Molina was one of the worst cleanup hitters in the past half milennium. His .287 OBP is painful to see in print, and his slugging percentage didn't even best Chris Iannetta. But given the 2nd most PA in the division, he cracked the top three. Eli Whiteside had an even worse OBP in 133 PA.

The franchise hasn't been shy about suggesting the Buster Posey might start the season at AAA. With Bengie Molina expected to leave in free agency, San Francisco will have to add a catcher in free agency if they want to keep Posey's seat warm. Troy Renck wrote last night to keep an eye on Yorvit Torrealba for that role. It makes a lot of sense from both sides. However, even starting Posey Opening Day might not be a bad idea. CHONE projects him to post a .325 wOBA next season, compared to Molina's .308 performance in 2009.