No - your culprit is the hot corner.

The Rockies were heavy favorites to outclass the NL West at third base going into the season.  Garrett Atkins was projected to finally rebound while Ian Stewart was expected to exhibit growth.  Either way, Colorado was sitting pretty.  Brendan Scolari's preseason report had the Rockies way out in front at third base, totalling 5.5 WAR, with San Francisco second at just 2.3 WAR.  Los Angeles was in a tie for last at just 2.0 WAR.

Part of that is misleading, as his projections gave the Rockies about 300 extra PA, so Colorado's lead over LA should been more in the neighborhood of 2.5 WAR.  Instead, it was Los Angeles that trounced the Rockies by almost 3.5 WAR.  There's a six game swing right there.

The third base position was comparatively very stable in 2009 for the division - only the Rockies failed to have  a third baseman accrue 500+ PA.Your graphical plot of the RAR for all five teams, with the positional RAR set at +2.5: 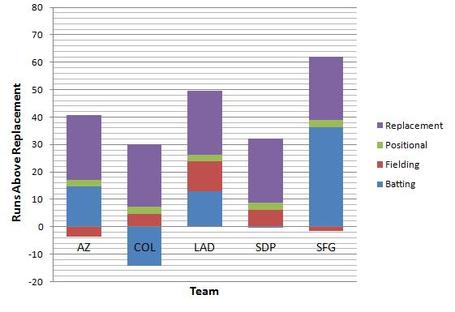 You might be surprised who comes out on top of the NL West rankings for third base.  (Hint:  this man is responsible).

There were 23 total third basemen, with the top five representing the main starters from each of the five teams.  The complete rankings/stats can be viewed here, along with all the juicy math behind the numbers:

Mark Reynolds overcame all of his strikeouts to post the division's best home run and RBI totals, nearly doubling his nearest pursuer in the HR column.  His poor fielding cost his team about half a win, but he is certainly a feared hitter in just his third season in the league.  Augie Ojeda struggled in his 20 games, but Ryan Roberts and Chad Tracy helped the cause in their limited duty.

Reynolds is firmly planted as the full-time starter for the forseeable future, and the 26-year-old should only be getting better.  He made just $423k last season and is due for a nice raise in arbitration.

All four Rockies who manned third base were actually below replacement value hitting-wise with park factors considered, a very disappointing showing considering the personnel in place.  Ian Stewart failed to hit over two and a quarter, and his patented slugging could only match Kevin Kouzmanoff.  Garrett Atkins' struggles are well documented, and while he was a below average fielder, I still calculate that he was a +0.34 WAR player at third (far from the 5.5 projected), likely due to a difference in park adjustments compared to Fangraphs.

Garrett Atkins will be gone and Ian Stewart has the job.  As glum as this season was, it should provide Rockies fans with great hope for next season.  Quite frankly, there's nowhere to go but up, and the potential is certainly there to make up that ground on the division.  I believe Stewart can take that necessary step forward, especially with improved hitting against LHP, which he never had a problem with until 2009.   Stewart made $404k last season, which will get a bump for next year.  With Atkins leaving, Dan O'Dowd will probably look for a veteran bench bat who can also play third, perhaps a Mike Lamb.

Casey Blake is the surprise winner in the third base rankings led in large part by his 0.8 WAR defensive contribution, which could quite frankly be a fluke.  He hasn't even been had a positive UZR at third base since his first year as a starter in Cleveland six seasons ago.  He was very clearly an asset with the bat, as he provided more value to Los Angeles offensively than anyone not named Manny, Andre or Matt.  Ronnie Belliard had a ridiculous .458 wOBA in his 38 September PA in Dodger blue.

Seven months ago, the Dodgers thought they might be eventually passing the torch from Blake to Blake (DeWitt), but Casey's emergence and DeWitt's regression makes that seem a little silly now.  Blake is the clear full-time starter for at least next season, as he will be in the second year of his 3-year $17.5million deal.

Kevin Kouzmanoff nearly usurped Blake as the division's most valuable fielder at the five spot, which is all that saves him after regressing offensively once again in a San Diego uniform.  Three Padres appear in the bottom five, but their negative contributions are so small that Chase Headley negated them six times over in 113 PA.

The 28-year-old Kouz is eligible for arbitration and looks to be the starter for next season.  There won't be a free agent replacing the Colorado native due to financial constraints, but if he struggles more, look for Chase Headley to move back to his natural position, opening an outfield spot for an infusion of youth.

Pablo Sandoval is clearly the best hitting third baseman in the division, or at least he was in 2009.  The 23-year-old Venezuelan struggles with the glove (as you might expect with a novice scout's eye) more than any third baseman in the division, but his hitting production is mind-blowing considering the hurdles he has:  no protection from Molina, age, moving positions, AT&T Park....The only reason he doesn't top this list is the 97 PA he spent manning first base.

Sandoval made just $402k last season, less than even Eugenio Velez.  He'll get a nice raise and will be starting at third and hitting third Opening Day.