Happy Friday, everyone! In the second weekly installment of Rockies Retro, we're going to profile one of the most memorable players in the history of the franchise, Alphonse Dante Bichette.

In parts of five Major League seasons before arriving in Colorado in 1993 via trade from the Milwaukee Brewers (for Kevin Reimer, who was the Rockies' fifth selection in the 1992 MLB Expansion Draft), Dante Bichette played for two different teams (the Brewers and the California Angels) and for the most part, was decent player with good offensive potential. However, he was a liability in the outfield and had a poor walk rate (drawing just 60 walks compared to 291 strikeouts), rendering him unable to earn an everyday job with either club. The Rockies saw something in the 28 year old outfielder, though, and made a shrewd move to acquire him on draft day. When breaking down his power numbers on a per 162-game basis, it's fairly easy to see why the Rockies wanted to take a chance on Bichette. He averaged 15 HR and 64 RBI, and seemed to be improving on his hitting each year, improving his OPS to .724 in 1992, after posting an awful .665 figure the year before. I think most Rockies fans would say that then-GM Bob Gebhard made the right decision, after witnessing Dante's performance during the Rockies' inaugural season.

During the off-season during the 1992 and 1993 seasons, Dante Bichette began a rugged weight-training program. He was quoted at the time as saying that he did so in anticipation of the supposed homerun-friendly conditions of the Mile High City. Bichette's work ethic during that off-season impressed manager Don Baylor enough to name him the opening day starter in right field for the Rockies. Dante responded by hitting the franchise's first ever homerun - an into-the-wind shot off of the Mets' Bret Saberhagen. He would go on to put up very good numbers in the month of April - posting a .314/.359/.514 line with 3 HRs and 14 RBIs, while playing in 22 of the team's 23 games. Also in much-improved fashion, Bichette struck out only 11 times in the season's first month (although he only drew 5 walks). More good things were on the way for the 29-year old slugger, who stayed remarkably consistent during his first season in Colorado, finishing with a .310 batting average, an .874 OPS, 21 homers, 98 runs batted in, and 43 doubles. Those were big numbers during that period of time in baseball, and they were accomplished in just 141 games, as Bichette missed the last 15 games of the season (minus one pinch-running appearance) with a fractured wrist, courtesy of Houston's Doug Jones. However, the egregious home and road splits (1.058 OPS in Denver; .701 OPS elsewhere) discounted his numbers in the minds of the so-called experts.

In 1994, Bichette had a monster first half for a better than expected Rockies team, hitting 21 homers and driving in 77 runs while posting a .303/.328/.547 line, which was especially good considering his dreadful May where he hit only .219/.252/.371. Because of the solid first half, Dante earned a spot on the National League All-Star team, the first such honor of his career. He singled to left off of Mike Mussina to leadoff the bottom of the fifth inning in his lone at-bat of the midsummer classic. Bichette went on to finish the strike-shortened season with 27 HRs and 95 RBIs in 116 games, which would have been good for 38 and 133 over a full season had he continued at the same pace. Despite a humorous situation to begin the 1995 season in which manager Don Baylor criticized Bichette for badly needing a haircut, Dante started the season off with a bang. In what may have been the second most memorable moment in Rockies history (up until late-2007), he christened Coors Field with a game-winning, 14th inning blast off of New York's Mike Remlinger on opening night. It was the first of 40 round trippers hit by Bichette in 1995, as his career-year led the Rockies to the first ever NL Wildcard berth - just three season's into the franchise's existence. Dante's line of .340/.364/.620 and 128 RBIs earned him a close second place finish to Barry Larkin in the NL MVP voting. That memorable season was the crown jewel in Bichette's solid career, and it was no coincidence that it was the team's best season of its first 14 in operation.

Despite encountering knee problems for the next few years, Dante Bichette continued to be an integral part of the Rockies organization and was their most consistent performer not named Larry Walker over the course of his last four seasons in purple pinstripes, averaging 29  HRs, 129 RBIs, and a .313 batting average during that timeframe.  He also had a career-high 141 RBIs in 1996 and a personal-best 217 hits two seasons later. Despite being the focal point in a flurry of trade rumors during the summer of 1998, Bichette still played on (and played well) for a good but not great team. In fact, Dante became the first Rockie to hit for the cycle in Coors Field on June 10th, 1998. Despite the fact that he became involved in some controversy regarding Androstenedione (which was Mark McGwire's supplement of choice), Bichette eventually earned himself a 3-year, $21 million contract extension. However, the club's decision to move in a younger, speedier direction meant the end of the 35 year old slugger's days in Colorado, as he was traded to Cincinnati for Jeffery Hammonds and Stan Belinda following the 1999 season. At the time of the trade, Bichette was the longest-tenured Rockie, as he was the only player on the roster every day of the team's first seven seasons.

Dante had a decent season in 2000 for Cincinnati and Boston, hitting .294 with 23 homers and 90 RBIs. In the final season of his Major League career with the Red Sox, he hit .286 with 12 homers and 49 RBIs in 391 at-bats. After sitting out for a couple of seasons, Bichette returned to professional baseball - as a pitcher/first baseman, no less - to play for the Atlantic League's Nashua Pride in 2004. Apparently, he wasn't too bad - he won Player of the Month honors in August, when he hit .363 with 13 homeruns. In one game during that month, he hit 2 homeruns, drove in 8 runs, and got the save.

In 12 MLB seasons with the Angels, Brewers, Rockies, Reds, and Red Sox, Dante Bichette hit .299 with 274 HRs and 1141 RBIs, while posting an .835 OPS. In 2007, his only year on the Hall of Fame ballot, Bichette garnered 3 votes (much to the chagrin of this guy, apparently). However, there's no doubt in any Rockies fan's mind that he is one of the greatest players to ever put on a Rockies uniform and for that, Dante Bichette, Purple Row salutes you! 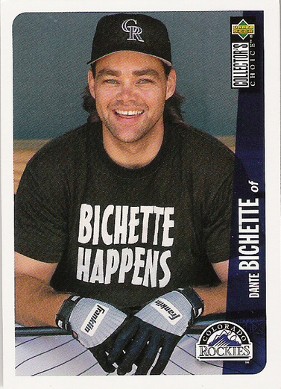