In the newest installment of Rockies Retro, we're proud to profile Armando Reynoso, who was one of the most successful pitchers for the Rockies in their first half-decade of existence.

Acquired from the Atlanta Braves in the 1992 MLB Expansion Draft (as the 58th overall selection), Armando Reynoso was a guy who would fit in perfectly with the staff the Rockies have currently - a soft-tosser who didn't strike many people out and did not have a good strikeout rate, yet he was still able to get people out via the groundball. After two cups of coffee with an Atlanta Braves team who won back-to-back NL Pennants (2-1, 6.17 ERA in 23.3 IP in '91; 1-0, 4.70 ERA in 7.7 IP in '92), Reynoso came to Denver and eventually earned a spot in the starting rotation which included has-beens and never-weres such as David Nied, Bruce Ruffin, Willie Blair, and Greg Harris - all guys that contributed to a staff ERA of 5.61, which was the highest that Major League Baseball had seen in 63 years. Fortunately for the club, Reynoso was a pleasant surprise, winning 12 games and posting a 4.00 ERA - a club record (for qualifiers) that stood for 11 years before it was finally broken by Joe Kennedy and his 3.66 ERA in 2004. In his first start in a Rockies uniform, he pitched a complete game at Florida, allowing one run on six hits while striking out 4. Armando's good fortune only continued from that point, as he made more starts (30), pitched more innings (189), and won more games than anyone else on the roster that year. He was also second on the team in strikeouts with 117 (which was easily a career-high) - behind only Bruce Ruffin's 126 - and even hit two homers. To top it all off, his gutsy performance earned him some Rookie of the Year votes in 1993, as he finished 11th among all NL players in that category. He was also named the team's Rookie of the Year AND Pitcher of the Year. If it weren't for Reynoso's success that season, the Rockies easily would have lost 100 games for what would be the only time in franchise history. The 27-year-old righty had a bright future ahead of him, and firmly held his grip on a spot in a starting rotation for a team that was expected to improve the next year.

A combination of unfairly high expectations and a high workload the previous year contributed to some struggles endured by Armando in 1994. Though he was pretty good at home (3.60 ERA in 30 IP), Reynoso lost the success that he had on the road the year before, as his road ERA ballooned from 3.68 to 6.45. He struggled badly with control that year as well, as his K/BB rate went from 1.86 to a mediocre 1.14. On May 20th against the Braves, it all finally caught up with him, as Armando departed after the fifth inning with elbow soreness. His season would end there, as he required surgery to rebuild his elbow after tearing several ligaments. Reynoso's high point of the 1994 season came in a May 3rd contest at Mile High Stadium against St. Louis in which he pitched a complete game, allowing one run and 5 hits while striking out 6.

Despite being blessed the extra time to rehabilitate his injury due to the season's late start because of the Strike, Reynoso still did not make his first start of the 1995 season until June 22nd at San Diego - a game that he won 1-0. Although he was never really able to get back to form in '95 (and still having severe struggles with his control), Armando still was able to finish with a 7-7 record, with that seventh win coming in his best effort of the season - an 8-inning, two-hit affair against the Giants. Despite going only 9-11 in his appearances, the Rockies made the playoffs that year, losing to the Braves in 4 games in the NLDS. Reynoso was not a factor in the series, only appearing once - in relief. Reynoso's 1995 regular season numbers:  a 5.32 ERA in 93 innings pitched, with 36 walks compared to just 40 strikeouts.

The Rockies went into the 1996 season hoping that Reynoso was finally 100% healthy and able to pitch well for a team that had World Series aspirations. He was solid, if not unspectacular, in the first half - he had a subpar 4-6 record, but posted a respectable 4.68 ERA in 17 starts - the latter number being the one that pleased the club the most. Another important number that helped show that Armando was finally healthy was his K/BB ratio, which was back up to 2.75. However, the Rockies were just 42-44 during the same period of time. Though his control eluded him in the second half (29 walks, 33 strikeouts compared to 20 and 55, respectively, in the first half), Armando went 4-3 in 13 starts. His ERA dipped to 4.96, but he was still the first qualifying starting pitcher in Rockies history to finish with 2 seasons with an ERA under 5.00. Still, it wasn't enough to propel Colorado to the postseason for the second consecutive season; despite finishing with a 41-35 record after the midsummer classic (including 7 straight wins right out of the gates), the Rockies finished in third place in the NL West.

Two months after the completion of the 1996 season, the Rockies traded Armando Reynoso to the Mets for Jerry DiPoto. In two solid but injury-plagued seasons in New York, Reynoso posted a 13-6 record with a 4.24 ERA. Before the 1999 season, Reynoso signed with the Arizona Diamondbacks and was a key contributor on a D-Backs team that won the NL West that year. He went 10-6 with a 4.37 ERA in '99, and followed that up by going 11-12 with a 5.27 ERA in 2000.

After re-signing with Arizona in the off-season, the wheels fell off of the aging righty in 2001, as he was just 1-6 with a 5.98 ERA before being shelved with a season-ending injury in June, but not before allowing the first career homerun to a guy named Albert Pujols. Despite being out for the season, Armando earned a World Series ring when the D-Backs disposed of the Yankees in seven games in the Fall Classic. There were talks of a return to the Rockies during the 2002 season, but they never materialized, and Reynoso ended up finishing the season - and ultimately his career - with the Diamondbacks in 2002, with his final two appearances fittingly coming against Colorado.

In 12 Major League seasons, Armando Reynoso compiled a 68-62 record with a 4.74 ERA - pretty decent numbers for a guy who spent most of his career battling injury and control problems. Reynoso is now serving as the pitching coach for the Mexican National Team, with hopes of being able to coach in the big leagues someday (according to an interview he did with Rockies Magazine in 2008).  Good luck with that, Armando, and as is the case with the other subjects of Rockies Retro, Purple Row salutes you! 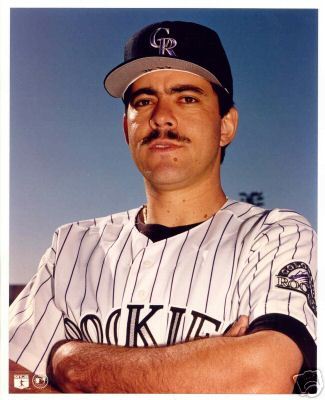