This week's edition of Rockies Retro profiles the sparkplug for the Rockies during their early years. In addition to hitting one of the most (if not the most) memorable homeruns in franchise history, he was an All-Star, Silver Slugger, and consistently one of the league leaders in stolen bases and AB/K ratio. He is Eric Young.

Eric Young, known affectionately as "EY" to the fans, became a Rockie on November 17th, 1992 as the 11th overall pick in the MLB Expansion Draft. No player drafted above him had a greater impact on their team than Young (Trevor Hoffman didn't do much for the Marlins), who had 4 and a half very good seasons in Colorado.

Originally drafted by the Dodgers in 1989, the former Rutgers University wide receiver played in 49 games with L.A. in 1992, posting a .258/.300/.288 line in 132 at bats. Despite not walking much and not hitting particularly well, Young showed a keen eye as well as patience and contact ability beyond his years at the plate, striking out only nine times as a 25 year old. The Rockies brass made note of that (as well as his potential to be a solid Major League regular at several positions) and were able to pick up a potentially great player at no cost when the Dodgers failed to protect him following the season.

EY was able to earn the starting job at second base out of Spring Training in ‘93, and was penciled in as the leadoff hitter on Opening Day by Rockies manager Don Baylor. In the very first regular season at bat in franchise history, Young attempted to bunt, but was thrown out by Mets catcher Todd Hundley. Though he missed getting the first hit in club history that day, he was able to achieve another notable first in Rockies history a few days later. On April 9th, 1993, in the first ever at bat for the Rockies in Denver, Eric Young sent a 3-2 pitch from Expos pitcher Kent Bottenfield over the wall in left-center field, sending 80,227 fans at Mile High Stadium into a frenzy. It was the first of four hits (in as many at bats) that magical day for EY, as the Rockies beat up on Montreal 11-4. The above-mentioned long ball would be the only one that Young hit in the first half of the season, as he went into the all-star break with a .260/.337/.334 line with one homer and 23 RBIs. Those stats may not have been extremely impressive, but Young struck out just 24 times over that span (while drawing 33 walks). He was showing all the components of a good, professional hitter. EY showed continuous improvement during the second half of the year, and finished the 1993 season hitting .269/.355/.353 with 3 homers, 42 RBIs, and 42 stolen bases, in addition to his 63/42 BB/K ratio. Despite his struggles in the field (his 15 errors at second base led the team to move him to the outfield, where he responded with six more errors), the Rockies must have been thrilled to have a 26 year old budding star on their hands.

Young showed considerably more pop in his bat the following season, improving his slugging percentage to .430 and matching his home run total from 1993 in the first month of the '94 season. He was able to do so in fewer at bats as well, as he lost some playing time due to his issues in the field. EY eventually began to suffer offensively, perhaps due to his decreased time in the field, as his batting average dipped all the way to .196 on May 20th. His bat would soon come around, as would his playing time (due to the ineffectiveness of guys like Howard Johnson and future pinch-hit connoisseur John Vander Wal), and Young finished the strike-shortened season strongly, hitting .297/.409/.442 from that point on.

With the Rockies acquisition of All-Star outfielder Larry Walker, combined with the success of centerfielder Mike Kingery, EY was relegated to pinch hitting and pinch running duty for the first half of the 1995 season. The frustrated Young was hitting just .175 when on June 23rd, 1995, second baseman Jason Bates went down with an injury. With nobody else capable of filling in, Don Baylor inserted EY into the lineup at second base, and he responded by hitting .343 the rest of the way and essentially cementing a place on Baylor's lineup card with his second consecutive strong finish. As an added advantage, Young's defense improved from where it was during the '93 season, as he committed four fewer errors. In addition, he stole 35 bases, his .404 OBP was a career best, and his nine triples led the National League. There was no question that EY was a HUGE factor in the Rockies making the playoffs that year.

Coming off a big season, Young's expectations from the team and for himself were bigger than ever. As a result, the 29 year old second baseman had the best overall season of his career. From start to finish, he was one of the best and most consistent offensive players in baseball. His batting average fell below .300 for only two days (June 2nd and 3rd) during the entire season. He also remained a huge stolen base threat - on June 30th vs. the Dodgers, Young stole second, third, and home in one inning and had 6 stolen bases overall in the game. He was honored for his efforts by being selected to his first (and only) All-Star game by NL (and Braves) manager Bobby Cox. His first half line of .345/.428/.451, along with 31 stolen bases and a 32/17 BB/K ratio, certainly justified the distinction. He grounded out in his only All-Star game plate appearance, but continued producing at a high level for the Rockies in the second half of the season.  His final line - .324/.393/.421 with 8 homers, 74 RBIs, and a league-leading 53 stolen bases were enough to earn him the National League Silver Slugger award for second basemen.

Following his monster 1996 season, Eric Young was seeking a big payday, and expressed his desire for a rich three-year contract. Instead, he was rewarded with a $2+MM raise, but only a one year deal. Even though he was feeling under-appreciated, the slightly-miffed EY still put up good numbers for the Rox (.282/.363/.408, 32 SB's in 118 games), but was traded to his original team, the Los Angeles Dodgers, for an erratic-but-promising young pitcher named Pedro Astacio, who would go on to become one of the most successful Rockies starting pitchers to date. At the time, Don Baylor offered this gem when asked about the situation with Eric Young:

"I didn't have a checkbook, so I couldn't pay him,'' manager Don Baylor said before the game. "If you don't appreciate somebody, you don't write his name in the lineup every day.''

Eric Young went on to play in parts of 9 more Major League seasons, with six different teams (Dodgers, Cubs, Brewers, Giants, Rangers, and Padres) and remained a very solid contributor until he finally decided to hang it up following the 2006 season. On September 12th, 2008, the long time fan-favorite signed a one-day contract and officially retired as a member of the Colorado Rockies. In 15 Major League seasons, Eric Young hit .283/.359/.390 with 79 homeruns, 543 RBIs, and 465 stolen bases (which is good for 43rd on the all-time list). He also finished with a lot more walks (660) than strikeouts (442).

EY currently works as an analyst on ESPN's Baseball Tonight and of course his son, Eric Young Jr. is currently battling for a spot on the Rockies' roster in Spring Training. 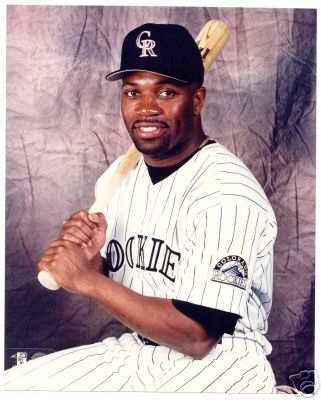