The University of Missouri has offered a few good pitchers over the last few years. Max Scherzer was the 11th overall pick by the Arizona Diamondbacks in 2006, and in 2008 the Washington Nationals selected Aaron Crow ninth overall. Scherzer and Scott Boras didn't agree on a deal with the D'Backs until right before the signing deadline came in 2007. Aaron Crow and his agents, the Hendricks Brothers, failed to reach an agreement with the Nationals, putting Crow back into play in the 2009 draft. Also, the Nats gain the 10th pick of the draft for failing to sign Crow, moving the Rockies to the 11th pick.

In 2009, the Missouri Tigers will have another high draft pick: 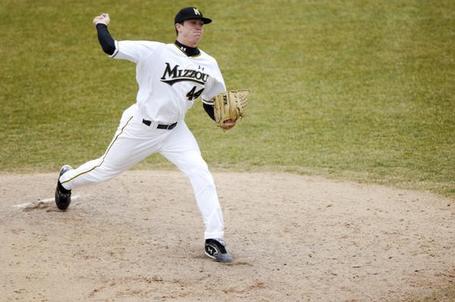 Kyle Gibson takes over Aaron Crow's vacated spot as the Friday starter. He'll face the Big 12's other top starters, and the Big 12 is always a tough conference. Here's what he's done over the last two years for the Tigers:

Missouri's player profile lists him at 6'6" and 208 lbs. If Missouri isn't lying, Gibson has filled out a little more, as he had been around 195 lbs. earlier in his career.

Join me after the jump for a bit more on Kyle Gibson.

First, here's some video of Gibson when he pitched in the Cape Cod League in 2007:

He has a three-pitch repertoire that consists of a fastball, slider, and changeup.

Saber Scouting, Brewerfan.net, and The College Baseball Blog offer profiles of Gibson (be sure to read them), but I'll sum up some of the best parts here. His fastball works in the high-80s to low-90s, with the occasional 93-94. His slider is his best pitch now and his changeup has the potential to be a plus pitch. On the downside, he could trun into a reliever if his fastball doesn't continue to improve. But if he does improve that pitch, he could turn into a front-line starter.

Gibson played for Team USA this past summer and went 5-0 in 13 appearances (one start). He struck out 25 in 17 2/3 innings and walked only four. He allowed two earned runs.

Russ's Take: This is the first profile this season, so I can't rank Gibson against anyone else for the moment. Right now, Gibson looks like the real deal as long as he doesn't implode this season and should be a top-10 selection. But it wouldn't be out of the question for him to be there at 11. At this time last year, who thought Christian Friedrich would fall all the way to the 25th pick when he had been projected to be a top-15 pick? Gibson's not going to be overpowering like Scherzer and Crow, but with his control, slider, and hopefully improving fastball and changeup, he's looking like a good prospect right now.

Big 12 Hardball - Be sure to follow Gibson and other Big 12 prospects here.