This is the first in a brand new series of Purple Row articles entitled Rockies Retro, where on a weekly basis, we'll reminisce about glorious (and not-so-glorious) purple pinstripers of the past. To kickoff the new venture, let's take a trip down memory lane and discuss the Rockies' first pick in the 1992 MLB Expansion draft - David Nied.

In 1992, at the age of 24, David Nied was coming off of a fantastic AAA season and a great start to his Major League career with the Atlanta Braves. In 6 games with the 1992 National League Champions, Nied compiled a 3-0 record with a 1.17 ERA, while racking up 19 strikeouts in 23 innings pitched. This was after he went 14-9 with a 2.84 ERA and 159 K's in 168 IP for Atlanta's AAA affiliate in Richmond. It was safe to say that Nied had a bright future in baseball - which justified the Rockies' (and their fans') excitement when he was deemed the first face of the franchise - a distinction that would ultimately end up attached to another #17. However, as it turned out, he wouldn't even end up being the most successful former Braves farmhand to pitch for the Rockies in their early years - that accomplishment belonged to Armando Reynoso (who we'll also profile in the near future).

Despite his eventual fate of being labeled as the most notable bust in an otherwise extremely successful draft by the Rockies, Nied showed loads of promise in his first couple of years with the club. As expected, he took his lumps in his first full season, finishing with a 5-9 record and a 5.17 ERA. His K/BB ration was also poor, at just 1.10. Nied was also extremely brutal on the road (1-6, 6.86 ERA). However, he was quite successful pitching in the high altitude of Denver, posting a 3.60 ERA at Mile High Stadium. Not to mention, he was very sold in the month of April (3-2, 3.60) before struggling mightily in May, and eventually, getting shelved until September with an injury.

As is the case with a lot of good, inexperience pitchers who struggle in their rookie seasons, Nied showed substantial improvement in his sophomore season. The high point in the 1994 season for Nied (and arguably the high point of his career) came when he shutout a powerful Houston Astros offense at Mile High Stadium on June 21st, hurling 9 innings of 4-hit ball. At one point during that season (after a July 14th victory over St. Louis), Nied was 9-4 with a 4.31 ERA and looking every bit like the guy the Rockies envisioned when they acquired him two years earlier. He struggled a bit over the final month of the season (which abruptly ended on August 12th in the midst of a labor dispute), but overall, Nied and the Rockies had to be feeling good about the progress he showed throughout the year.

Find out what happened next after the jump.

Some would say that the 1994 Major League Baseball strike is to blame for the downfall that began to take place after his breakthrough season. While trying to get ready for the 1995 season after the labor dispute ended, Nied injured his elbow. This excerpt from a 1997 article by ESPN's Jerry Crasnick tells it all:

"I was so excited and gung-ho about building on what I did the year before, I aired it out within 15 minutes the first time I threw," Nied said. "If somebody had held me back, maybe things would have been different. I was so excited, I don't think you could have held me back."

Nied was never the same. He tinkered constantly with his mechanics to compensate for his arm trouble, and tried to rehabilitate himself in minor-league towns from Salem, Virginia, to Colorado Springs, Colorado. He pitched a total of 9 2/3 innings in the big leagues with Colorado in 1995 and 1996.

Following the 1996 season, David Nied was granted free agency. He went on to sign with the Cincinnati Reds in 1997, but decided to retire after those sneaky Red Stockings tried to demote him to AA Chattanooga.

Who knows what could have been if Nied would have stayed healthy. Despite some people saying that he was "too nice" to handle the golden boy image, there's no denying that his future with the Rockies was bright before baseball's darkest day arrived in August of 1994. So, to David Nied: no matter where you are or what you're doing these days (according to Wikipedia, you're about to marry a reality TV "star!"), Purple Row salutes you! 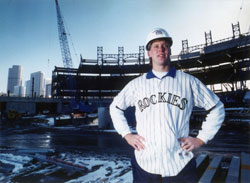