Monday Rockpile: "Hurt but Not Showing It?"

Share All sharing options for: Monday Rockpile: "Hurt but Not Showing It?"

A few days ago, Harry Pavlidis at Beyond the Boxscore charted Jeff Francis over the last two seasons to see how his injury affected him. Head over there to look at the charts, but what Harry finds from the first one on pitch speed is that:

While it looks like Francis lost a bit of velocity at the high end before going on the DL, the end speed picture doesn't match - and those numbers are more reliable from park to park*,  In any case, he looks to have recovered after the DL visit, if anything was lost to begin with.

* I'm testing my park/data correction method.  Some tests have gone very well, some not so much.

His second chart looks at pitch height at the plate; Francis's curveball, he finds, didn't hit the dirt much in 2008. If these charts don't show how his injury really affected him, what did? Something brought up in the comments (and here at some point when the papers mentioned it): Francis's arm slot was never consistent. If Francis does pitch in 2009, that's something we'll want to keep an eye on.

A few weeks ago we looked at Rich Lederer's article on strikeouts per 100 pitches. Aaron Cook was at the end of that list, lower on the list from 2007 but having improved his K/100P. But as we mentioned in the comments, Cook's success is a result of improving his strikeouts numbers and maintaining his groundball percentage. Well, Lederer checks in with an article charting pitchers for GB% and K/BF%: 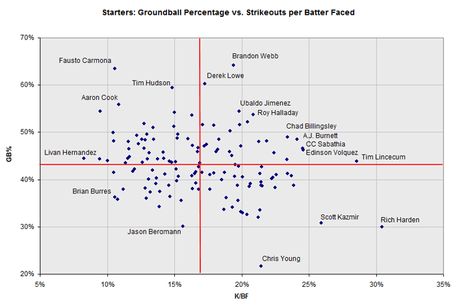 For the Rockies, Aaron Cook andd Jeff Francis are in the northwest and Ubaldo Jimenez and Jorge De La Rosa (not shown but mentioned in the article) are in the northeast. Lederer's in the camp of "Jorge De La Rosa can be very, very good for the Rockies, but he needs to walk fewer batters." And if Ubaldo Jimenez keeps improving he can join the Cy Youn Award discussion.

Who knows if the owners will actually ever change the blackout policy, but here's the map if you're interested:

Look at all that unnecessary overlapping.