Sunday Rockpile: Earning an MLB job is a little like this...

Until the Rockies get to the awesomeness level of paratrooping with sharks: 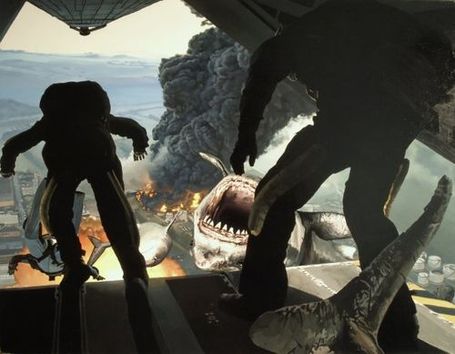 (painting by Portland Artist Caleb Brown, via my love for you is a stampede of horses)

... paying attention to Spring results will only cause unnecessary and pointless anxiety.

The Denver Newspaper Agency will retain its 8% share of the Rockies according to the remaining newspaper in that group. This will remain an interesting story to watch, because even without the Rocky, the DNA continues to hemorrhage money. After they sell off the News' remaining assets they will buy some time for the economy to straighten out, but the value of that chunk of the Rockies franchise has to be a tempting morsel for a business starved for cash.

Patrick Saunders reports that Manny Corpas' confidence is returning, and the results are showing that thus far. Other notes by Suanders include updates on the injuries to several of our players as well as the welcome news that Tulo's quad troubles seem to be in the past.

Thomas Harding at the Rockies official site has more on Tulowitzki's stretching routine to keep the quads limber.

Troy Renck's thoughts about how Frank McCourt's attempts to publicly humiliate Manny Ramirez in contract negotiations by pointing out his lack of suitors could backfire echo something that I've been feeling as well, but I'm not sure yet if there's actual merit to this or just wishful thinking on my part. We do know that an unhappy Manny not playing up to his ability pushed the Red Sox to dump him last season in the first place, and that they felt they were better off without him, even at the additional cost of bullpen depth. If there was some way to saddle the Dodgers with that version of Ramirez, it would be the second best alternative to them not getting him at all.