This installment of Rockies Retro goes in a little bit different direction than the previous editions. Every former Rockie profiled up to this point had experienced some success, and/or was well-known, during their tenure in Colorado. Today, however, Rockies Retro will focus on a player who didn't really fit into either of those categories (mostly because he wasn't with the club long enough - he was actually solid in '93), but still holds a special place in the franchise's history. This player is Alex Cole.

Originally drafted in the 11th round by the Pirates in 1984, then again in the second round by the Cardinals in 1985 (Pittsburgh failed to sign him the year before), Alex Cole eventually made his way to Colorado in 1992, as the 17th overall pick in the MLB Expansion Draft. By that time, Cole had already been with 4 organizations in his 8 years in professional baseball.

Cole began the Rockies' inaugural season of 1993 penciled into Don Baylor's lineup as the starting centerfielder. He had a hot start (which may have coincided with the amount of games the Rox played at home in April), hitting .309/.382/.382 in 77 plate appearances (in case you were wondering, he hit .349 at home and .240 on the road, in typical stereotype-perpetuating fashion). However, Cole's numbers began to dip as the club played more road games, and he ended up splitting time in the outfield with guys like Daryl Boston and Chris Jones.

All things considered, though, Cole had a very solid 1993 season for Colorado, finishing up with a .256/.339/.305 line, with 43 walks (including the first in Rockies history, on April 5th at New York) and 30 stolen bases in 348 plate appearances. Stats like that suggest that he was truly that season's answer for Willy Taveras - a recent Rockie who was well known for having great speed and no power - though to be fair to Cole, he got on base at a much better clip because he was able to draw a walk once in a blue moon. He made up for that advantage over Willy, however, with the fact that he was a terrible defender. If you asked which game this happened in, I wouldn't remember, however I vividly recall a play in which Cole tried to climb the wall to catch a fly ball, only to have it hit him in the back. Also, he had issues with throwing the ball to the wrong base and missing cut-off men. He also wasn't exactly a wordsmith, once uttering the quote "Myself made a great try on the long ball. Why are you knocking myself? Anybody can throw to the wrong base once."

The Rockies chose not to resign Alex Cole after their inaugural season, and Cole ended up in Minnesota, where he put up a very good season in 1994, hitting .296/.375/.403 with 44 walks and 29 stolen bases in 345 plate appearances - an improvement over the previous season where he played half of his games in Mile High Stadium. However, Cole's downright shabby defense prevented him from really breaking out in the big leagues, as he was never able to hold down a starting job. He stuck around with the Twins for another season before heading to Boston, where he would play his final Major League game on May 22nd, 1996.

Five years later, while playing in the independent Atlantic League for the Bridgeport (CT) Bluefish, Cole was arrested at the Ballpark at Harbor Yard in Bridgeport under the suspicion of possession and distribution of heroin. He ended up pleading guilty and serving 18 months in prison. Four years later, he was served a judgment for over $30,000 for running up credit card bills under a friend's name and failing to pay them.

All shortcomings aside, Alex Cole's special place in Rockies history is cemented because of the fact that he was the starter in centerfield for the team's first ever regular season game, and to a lesser extent, because he was a solid player for the team in their inaugural season. So, whatever you're up to these days, Alex Cole, Purple Row salutes you! 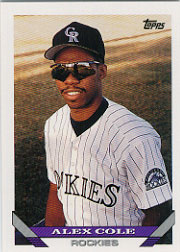