Know Your Foe: Who is James McDonald?

Share All sharing options for: Know Your Foe: Who is James McDonald?

"It is time for the 2009 World Series. The NL West champions send out their young stud to the mound, a 25-year-old right-hander who brings an intimidating swagger to the mound despite his gangly 6' 4" 200-pound frame. The young gun whips a 95mph fastball past the hitter with ease, then drops a knee-buckling curve perfectly through the zone. It is apparent this kid has top-of-the-rotation potential for years to come."

Rockies fans are certainly hoping the above scenario applies to Ubaldo Jimenez this fall. However, it could just as easily be James McDonald of the Los Angeles Dodgers.

The lanky right-hander from Long Beach was an 11th round draft pick in 2002 of the Dodgers. Arm trouble facilitated his transition to the outfield for the 2003 and 2004 seasons. McDonald was atrocious with the bat, as he could hardly manage a .600 OPS as he toiled in rookie ball in both seasons. He retook the mound in rookie ball once again 2005 at age 20 and began his ascent.

McDonald moved up a level per year until 2008, performing exceedingly well at each. He never had an ERA over 4, or a WHIP over 1.30. Complete minor league stats.

The Long Beach product completed his ascent with an impressive major league debut on September 17, 2008 against the Pirates and completed the regular season with six innings pitched. He also tossed 5.1 scoreless innings in the NLDS vs. Philadelphia. But Eric Stephen from TrueBlueLA points out that McDonald was pitching in minimal leveraged situations in regular season and called his playoff outings "mop-up" duty.

McDonald may have a similar wiry frame to Jimenez, but his approach is altogether different. In fact, his repertoire more resembles Brandon Hynick.

Ed Price at Baseball America reported that McDonald had the best control and best changeup in the Dodgers' organization even before his breakout year in 2008. He waslisted as the No. 2 starter in the 2012 2011 projection. McDonald also boasts a plus 12-6 curve.

"I think James McDonald will be a very good starter, but alas it seems he is destined, at least to start 2009, to be in the bullpen. I don't really agree with the move, because I think he is the best option to be the club's 5th starter. Wherever he pitches in 2009, I expect McDonald to excel."

I personally agree with the allocation of JMcD in the bullpen. His top two pitches are his curveball and changeup. Adding a third plus pitch to that makes him devastating out of the bullpen. Reports are that he has added 4-5mph to his fastball while working out of the pen, so now his "weakest" pitch is a fastball that can touch 96mph. A pitcher with three plus pitches and exceptional control spells DOOM for offenses late in the game.

The Dodgers' current setup man for closer Jonathan Broxton is Hong-Chih Kuo. McDonald has the talent to step into that setup role by season's end if Kuo falters or is injured.

If you're interested in more, check out Kensai's analysis at Fire Ned Colletti Now.

You won't get anything from the projections at fangraphs. Marcel projects far too few innings. Oliver and Bill James don't even bother to chime in. CHONE has him listed as a starter. TrueBlueLA has no finite projections.

Verdict: Don't put too much stock into McDonald's success thus far at the major league level - all were mop up duty. The guy was in AA at this point last year and aas a predominant minor league starter, he may need to adjust to life in the bullpen.

With that said, you don't get a "young" player with three plus pitches and very good control all that often. His control will help avoid the rookie meltdown. Don't be surprised if Joe Torre turns to him in higher leverage situations quite soon.

AZ Snakepit voted on the biggest threat to the D-Backs divisonal hopes in 2009. The Rockies got just 2% of the vote, and even got outvoted by Slumdog Millionaire.

Signed RHP Tony Pena Saturday to a 1-year $430k contract. Pena pitched in 72 games in relief for Arizona in 2008, recording three saves and a 4.33 ERA. Also signed in the past week are pitchers Yusmeiro Petit, Leo Rosales and Kyler Newby, who each signed one-year deals near the league minimum.

RHP Juan Cruz signed with Kansas City Saturday on a 2-year, $5.5million contract. The 30-year-old led NL relievers in K/IP in 2008. The signing did not involve a sign-and-trade deal, so Arizona will receive compensation for the Type A-free agent, a week after obtaining Los Angeles' 17th overall pick in compensation for Orlando Hudson.

Rox Girl reports that the Diamondbacks have odor issues.

Have many high picks

The soap opera courtship between Manny Ramirez, Scott Boras, Frank McCourt and Ned Colletti continues, with still no contract. They are reportedly less than $2million apart. . I'll leave it at that. 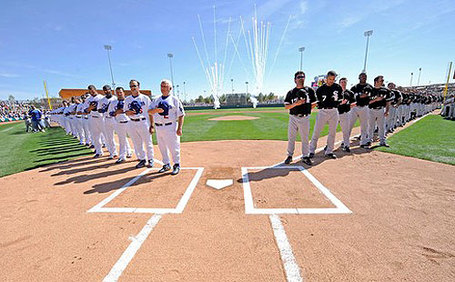 Agreed to terms with six players for 2009 on Saturday. They are Blake DeWitt, Scott Elbert, Victor Garate, Matt Kemp, Lucas May and James McDonald.

Blogger Lyle Spencer dreams up a scenario of trading Jake Peavy and Adrian Gonzalez for 10 players.

Jake Peavy reportedly sang "Go Cubs Go" in a Las Vegas bar in December. Naturally he denies this. Yet he still could be a Cub by May.

Evidence that nothing is going right in San Diego: OF Brian Giles is being sued for $10million by his former fiance, Cheri Olvera, citing his physical abuse led to a miscarriage. From the article: "Giles has denied the allegations and has countersued, accusing her of striking him, pulling his hair, slapping him, kicking him and hitting him with a car." Giles was charged with domestic violence for Olvera at a bar in 2006.

Peavy thinks he is a Cub

The Giants acted quickly in free agency, adding Edgar Renteria and Jeremy Affeldt at the dawn of free agency. Despite seeing the market plummet for other free agents, they don't regret the quick contracts.

Grant at McCovey Chronicles is in love with Tim Lincecum, as evidenced by his recent projection.