A near perfect afternoon of work by Todd Helton (three for three plus two walks, two RBI and two runs), Ryan Speier and Huston Street was overshadowed by a bad fourth inning by Jorge De La Rosa. JDLR could have been included in the kudos had he not given up five runs then, the only blemish against four goose eggs in the other innings he pitched. Patrick Saunders calls it a "snowball effect" and it does seem to afflict De La Rosa frequently.

Last season, the game that nearly saw De La Rosa lose his starting opportunity with the Rockies for good, against the Florida Marlins on July 31, saw him put up this sequence in the second inning: deep fly out, single, walk, walk, K, walk (run scores), single (2 runs score), HBP, walk (run scores), double (two runs score) and he finally got yanked without recording the last out.

The notable difference is that in the first example we saw him give up four walks and an HBP, today just one walk. The key similarity in both cases was an inability to get that last out when he needs it the most before the major damage happens. Note that in both scenarios he had the bases loaded with two outs and a chance to exit with only one or no runs crossing the plate. In both scenarios he had this opportunity with at least two batters and in both he let at least three safely advance after the first opportunity arose to end the inning. In the first example, he wasn't quite able to reach that end point, today, thankfully he was.

Compare these to James McDonald's first inning for the opposition this afternoon: K, walk, walk, K, HBP... okay at this point McDonald's in the De La Rosa fail zone. Troy Tulowitzki is coming to the plate and could do plenty of damage with the bases loaded, he works a deep count but in the end McDonald catches him looking on a curveball. Third out. No runs score.

Jorge De La Rosa allows Juan Castro, who last hit over .200 in 2006, to extend an inning whereas James McDonald cuts Troy Tulowitzki (who went zero for three with five LOB) down to size. If either of these events get repeated with any sort of frequency during the regular season, we could be in for a long summer.

THE BIG QUESTION: So knowing these games don't count, would you rather have a starter give up zero runs but allow several baserunners/inning via walk, hit or HBP and run into deep pitch counts in only three innings as James McDonald did for the Dodgers today, or would you rather a pitcher have four sharp innings but one terrible one where everybody holding a bat was able to connect as Jorge De La Rosa did? I think I would prefer the known strike thrower, but the closer we get to opening day, the more enticing run prevention is becoming.

The almost as big question:

Clint Hurdle said he wouldn't wait until opening day to name his closer, the impression I got was that it would pretty much be settled by this weekend. Does Street have the edge over Manny Corpas at this point? It would appear to be so to me, but what do other people think? I think as long as both are quality and used in high leverage situations, it doesn't really matter who's got the closer label, I'm just glad to have a few good arms out of the pen like this.

Wrap rating: How to make a Snowball Wrap 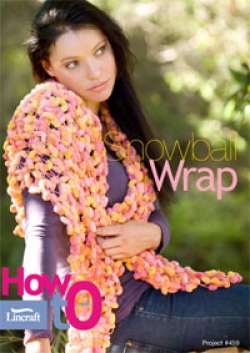 Success in this pattern does not depend on exact tension, therefore no tension details are given.

Ah but if only they knew JDLR, we need those tension details here, people.