Share All sharing options for: Tuesday Rockpile: Todd Helton Back By Week's End?, The Future of Rockies Spring Training

Thomas Harding reports the latest on the Rockies future Spring Training home.  Apparently, sharing a training complex with division rival Arizona "is an idea both teams look upon favorably."  Heck I'll take anything to feed a rivalry.
Patrick Saunders at the Post reports Todd Helton will be able to play in "about a week."  Maybe then the offense can get someone on base.  At least a double play is more exciting.  Memo to Hurdle:  put Joe Koshansky or Matt Murton behind the Todd to create offense....

The Rockies signed IF Mark Bellhorn yesterday.  Yawn.  The former Rockie spent 2008 with the Dodgers' AA affiliate and has managed only one major league hit since 2006.  Still, that's more than the average Rockie in Spring Training....
Speaking of Spring futility....Drew Litton continues to accurately illustrate the current pulse of Denver area sports at www.drewlitton.com.  His latest is right on the money.

For funsies, let's look at the batting averages of the projected Rockie starters.  Yeah, I know it's six Spring Training games.  But won't it be fun?!?! 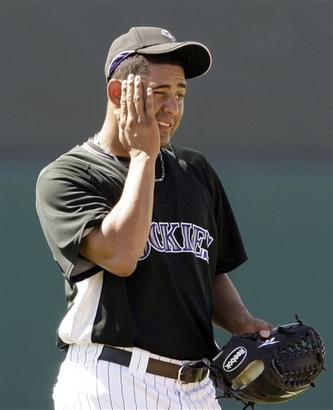 Courtesy of Yahoo! Sports, that would be Franklin Morales after giving up the third of three home runs Monday afternoon.  Can we please temper the enthusiasm for the youngster?  I really think Colorado Springs could do him some good in April.  By my count, Greg Smith has to be in the lead for the fifth rotation spot by default.  He'll get a chance to strengthen that standing today.

The Post's Woody Paige gives a nod to the development of home grown players on the Rockies roster, then cleverly dubs them "home groan," claiming the formula is ill-suited for success.  Sure Woody, we could sign Derek Lowe to a big contract.  But have you noticed the Rockies payroll is already undertaken one of the largest increases in MLB?  "What irresponsible, frugal owners"....

Lastly, Tim Dierkes at mlbtraderumors.com lists Todd Helton as one of the 45 worst contracts in MLB.  Have a wonderful upbeat happy day!