Few pitchers have had any success in their profession as a member of the Colorado Rockies; many were great before they pitched for the Rockies, while many others enjoyed good years after leaving Denver (in the case of Daryl Kile, he fell into both categories). However, before the likes of Aaron Cook, Jeff Francis, Ubaldo Jimenez, and even Jason Jennings, there was one pitcher who had the best years of his career playing for the Rox - that pitcher was Pedro Astacio.

Astacio came to the Rockies on August 19th, 1997 from the Los Angeles Dodgers in a trade for Eric Young, who was one of the better players in the short history of the franchise. That's never an easy situation for any player, but Astacio (who was 48-47 in parts of six seasons with L.A.) responded well upon his arrival in Denver, posting a 5-1 record with 4.27 ERA in seven starts. Perhaps more impressive was the fact that he struck out 51 batters in 48 innings, which was a strikeout rate that he never came close to matching in his time with the Dodgers. He had a magnificent start at Atlanta on September 14th, 1997 where he pitched 8 innings and did not allow a run and gave up only 4 hits. Astacio struck out 12 batters in that game - a club record at the time (before Kile struck out 14 a little less than a year later).

His first full season with the Rockies did not treat him quite as well, though. In 1998, Pedro was lit up for a 6.23 ERA in 34 starts. He ate up a lot of innings (209) and struck out his fair share of batters (170), but he wasn't at all able to keep the ball in the park, allowing an astonishing 39 home runs and actually allowed more on the road (20) than at home (19), although that didn't necessarily reflect the disparity in ERA (7.39 at home; 4.90 on the road).  Despite the poor numbers, Astacio kept the Rockies in a lot of games because of his ability to go late into games, and the club finished with a 19-16 (though Pedro was only 13-14) record in his appearances. Because of this, as well as the flashes of greatness that he was able to show on any given night, Colorado rewarded him with a hefty raise (from $3.35M to $6.15M) going into the next season.

1999 proved to be Pedro Astacio's best season in a Rockies uniform. He finished 17-11 with a 5.04 ERA - a respectable number back in those wild pre-humidor days - and struck out 210 batters (which is still a single-season club record) in 232 innings pitched. In addition, he had five starts in which he punched out at least 10 batters, and hurled seven complete games - which is also still a single-season club record. Astacio was also able to muster up 20 hits and 7 RBIs at the plate over the course of the season. As was the case with most seasons in his time with the Rox, Pedro was outstanding on the road in 1999, as he went 12-6 with a 3.60 ERA. This begs a question that perhaps should be saved until the end, but I'll use it here and you can keep it in mind: How good would Pedro Astacio have been if the Rockies installed (and perfected) the humidor prior to that season?

Astacio lost his first two starts of the 2000 season, the proceeded to roll off six straight victories, behind some of the best pitching of his career up to that point. He remained consistent throughout the entirety of the season before tweaking his shoulder a bit in the first inning of a game against the Cubs on September 6th. The injury wasn't serious, but the Rockies took it easy with him and ended up shelving him for the final couple of weeks of the season after a bad start against the Dodgers where he gave up six runs in an inning and a third. Unbeknownst to Pedro and the Rox at the time, the minor setback ended up starting a domino effect of injuries that plagued Astacio for the remainder of his career.

Heading into 2001, Astacio seemed healthy and performed very well out of the gates, going 3-1 with a 3.09 ERA in April. However, with the exception of a few good starts (namely a July 5th contest against the Padres in which he hurled a complete game shutout - the only one of his career with the Rox), Astacio lost focus and began a downward spiral, winning just 3 of his final 18 starts with the Rockies that season. The combination of his ineffectiveness and relatively high salary sparked a decision by Rockies management to trade Pedro Astacio (and cash) to the Astros at the trade deadline for Scott Elarton. Pedro went 2-1 with a 3.14 ERA for the Astros in 4 starts, but a strange string of injuries - perhaps due in part to the workload he shouldered in Colorado - cut the end of his season short.

Astacio would spend the injury-plagued final five seasons of his major league career with five different teams (Mets, Red Sox, Rangers, Padres, and Nationals), before running out of time after the 2006 season. He signed a minor league contract with Washington in 2007, but injuries and ineffectiveness would not allow him to make it back to the big leagues. He finished his career with a 129-124 record and a 4.67 ERA, just .12 runs higher than the league average during his days as an MLB pitcher. He struck out over 1600 batters in just under 2200 innings. While with the Rockies, Pedro was 53-48 with a 5.43 ERA, while striking out 749 batters in 827 innings pitched - good for a K/9 rate of 8.15. Astacio is the Rockies' all-time leader in complete games, runs and earned runs allowed, home runs allowed, hit batsmen, and strikeouts.

Whatever you're up to these days, Pedro Astacio (according to Wikipedia, you're the father of two sons named Pedro and an amateur Jai Lai player), Purple Row salutes you! 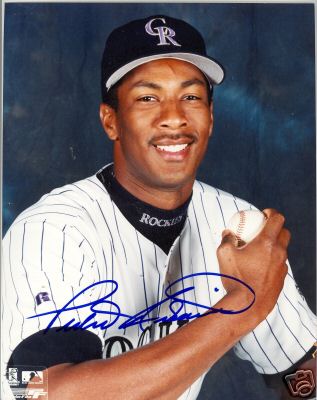