Share All sharing options for: Rockies 9, Giants 7: Rockies hang on for second win

Clint Hurdle gave 8 innings to two fifth starter hopefuls Saturday. Franklin Morales (1-1) started and pitched four shutout innings for the win, lowering his spring ERA from 9.00 to 5.00. He even collected a single off Giants starter Matt Cain. Jason Hirsh did not fare as well, as the Colorado Rockies (2-7) hung on to beat the San Francisco Giants (4-7) by a score of 9-7 in Scottsdale.

Franklin Morales: 4 IP, 0 R, 0 BB, 3 K, 3 hits. 1-2, 1B. Morales used his curveball extensively Saturday, often with great success, although Travis Ishikawa roped two singles off of two poorly located benders. With the struggles of Hirsh, Josh Fogg, Greg Reynolds and Greg Smith, Morales is in the lead for the fifth spot in the rotation. Morales threw 52 pitches, 42 for strikes in his four full innings. Morales was also facing the Giants major league lineup, except for OF Fred Lewis.

Clint Barmes went 4-for-4, falling a home run shy of the cycle. His four hits and four RBIs led the offensive charge as he rose his spring average to .467.

Jason Hirsh continues to disappoint in his quest to regain his form and spot in the rotation. Hirsh was slotted to pitch four innings Saturday, but he was so ineffective through 69 pitches, Hurdle removed him with one out remaining. Hirsh gave up 6 ER on 7 hits in 3.2 IP with just one strikeout and three walks. He pitched two scoreless innings but allowed two-out hit in both.

Steven Register relieved Hirsh in the ninth inning and was charged with the responsibility of stopping the bleeding. Instead, he promptly gave up a 3-run home run to Ryan Rohlinger. The Rockies led by eight at one time but when Register retired Buster Posey to end the game, the tying run was on-deck.

The Rockies scored nine runs on nine hits and three walks in three innings against Ray, Pat Misch and Henry Sosa. None of those three figure be a big contributor to the Giants this season. The other three who pitched - Cain, Jeremy Affeldt and Bob Howry - certainly do. The Rockies managed only four hits, one walk and no runs in those six innings.

Melted chocolate bar. Even though Hirshy melted down, the end result is still sweet, although it maintains some bitterness and is less satisfying than it should have been. 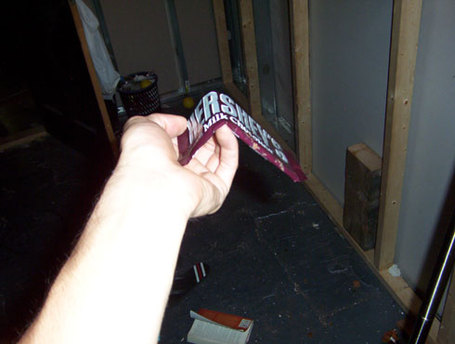