Coming to you this week from the home of the Rockies, the newest installment of Rockies Retro profiles the all-time single season record holder for pinch hits - John Vander Wal.

John Vander Wal made his way to Colorado in 1994, when the Montreal Expos sold his contract to the Rockies before the season began. Prior to that, he had played in parts of three seasons with the Expos, posting a .233/.307/.362 line in 489 at-bats.

From the very moment he put on a Rockies uniform, Vander Wal was pretty much used exclusively as a pinch-hitter.  In 1994, Vander Wal hit .245 with 5 home runs and 15 RBI in 110 at-bats. Though the batting average wasn't high, John had a penchant for drawing walks and putting up good at-bats, allowing for other Rockies' hitters to succeed. Plus, he was one of very few Rockies who were able to have more success on the road than at home. Although the sample size was relatively small, Vander Wal's OPS on the road was .817, compared to .700 in the Mile High City.

Vander Wal stuck with the Rockies in 1995, and it paid off for both parties. John hit .347/.432/.594 in his pinch-hit-extraordinaire role, and recorded a Major League-record 28 hits under said role - a great accomplishment considering the nature of the position, where high-pressure situations are usually involved. He also hit 5 home runs and drove in 21 runs in 101 at-bats that year, while drawing 16 walks against only 23 strikeouts. Not to mention, accomplishing all of the above while constantly being patronized by teammates for his love of McDonald's. Considering his rather clutch numbers, it would be safe to say that Vander Wal was a HUGE part of the Rockies getting to the postseason in '95.

In 1996 and 1997, his production plummeted - especially in '97, when he put up a paltry .174/.255/.228 line while battling some injuries. He played a bit more than usual in '96 (evidenced by his 151 at-bats which were the most during his time with the Rox), as the pinch-hit connoisseur turned utility man was often used as a fill-in for the injured Larry Walker, and may have become uncomfortable in his role. Regardless, the club felt he was no longer the pinch-hitting threat that he was a couple of years earlier, so they dealt him to San Diego for minor leaguer Kevin Burford in 1998. Vander Wal appeared in the World Series later that season, collecting two hits in five at bats against the Yankees in the losing effort.

After being used in a bench role for his two seasons in San Diego, Vander Wal earned a full time job in 2000 with the Pirates, after being acquired in a trade from San Diego for Al Martin. John responded by hitting .299/.410/.563 with 24 homers and 94 RBI in 384 at-bats, which easily qualified as his best and most complete season as a big leaguer. He stayed on board with the Bucs for most of the following season before making his way to San Francisco with Jason Schmidt in a trade for Armando Rios and Ryan Vogelsong.  He finished the 2001 season with the Giants, posting a respectable .270/.364/.442 line with 14 HR and 70 RBI.

After bouncing around with the Yankees, Brewers, and Reds organizations for a couple of seasons, Vander Wal decided to hang it up after the 2004 season. He finished his career with 129 pinch hits, which ranks seventh on the all-time list. He recently accepted a position as a scout with the San Diego Padres organization, after spending a few years running his own business in Grand Rapids, MI.  It is not known whether or not he still has a fast food fetish but either way, John Vander Wal, Purple Row salutes you! 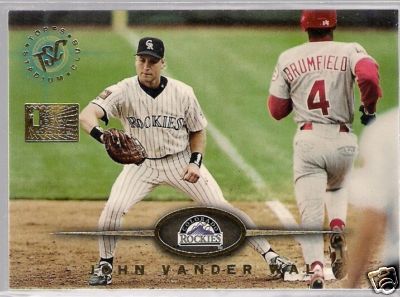