Share All sharing options for: Keeping a Clean Scorecard: A Baseball Beancounter's Bible

I'm a statistics guy. Well, a statistical analysis guy. I like stats that are made of acronyms and may confuse Joe Morgan. I think most of the traditional statics we use are flawed, incomplete, and too often victim to small sample sizes, and other flaws.

But whether you think the Win is the ultimate statistic or you'd prefer to compare contextual wOBAs and compare them to a player's VORP for the season, these numbers all have to come from somewhere.

Where is that somewhere?

No, but seriously, baseball statistical evaluation is only worthwhile if the statistics are both there and properly collected.

That's right, fair RowBots, today, we are going to learn how to keep a proper scorecard.

Now there are many ways to get a scorecard. You can buy a book full of them at Dick's or Sports Authority, you can buy an individual card at the Rockies game for $1.50, or you can do what I do, and make your own. I use the scorecard at http://www.baseballscorecard.com. Reason for this is that they have a fair number of spots for pitchers, they have a lot of room for substitutions, and the scorecard isn't overly cluttered on the actual score box.

Join me after the jump and we’ll start learning how to keep score.

OK let's get started with the absolute basics, starting with Positions.

Now I'm gonna wager that everyone reading this is at least somewhat familiar with how the position number assigmments go. But I'll then assume you don't and tell you anyhow.

This shorthand is used to save room in the score box for scoring plays as they happen.

The shorthand all has to do with how every play goes down. Offense, Defense, they all have their specific notation.

All plays are marked by noting all the players who were involved in the end result of the ball, separated by a dash. For example, a groundout from the shortstop to the first basemen would be marked as "6-3". A groundout that is first deflected by the pitcher, then to the second baseman and on to first would be marked "1-4-3". It's really that simple. For starters.

Now when it comes to plays that are handled by one player, you typically need to add another mark or notation to indicate the nature of the putout.

A flyout is typically scored just by marking a large number over the score box to indicate which fielder handled it. For example, a flyout to CF would just result in a big "8" on the score box. Some people like to mark "F8", but I prefer the number by itself, and I'll explain why in just a second.

Now when it comes to Lineouts and Popouts, we all know there's a difference from a standard fly ball. I like to mark these specifically on my scoresheet as "L8" or "pop6", indicating a lineout to CF or a popout to SS. I also distinguish flyouts and popouts based on where the ball was fielded. If CF, RF, and 2B are all converging on the ball, I consider it to be a popout, regardless of who catches it. But if it's a clear ball to the RF, and the 2B is nowhere in sight, despite how much of a "can of corn" it is, it's still a flyout. Popouts are typically related to the infield, but like I said, if the OF is converging with the IF to catch the ball, it's in the popout range.

An additional type of fielding out to mention is the foul ball fly/popout. I score these the same as if they were fair balls, but this is where I include that "F" that I mentioned earlier. So a popout to the C in foul territory would be scored "popF2".

We can't forget double plays in here either. They're relatively simple as well, you mark every fielder that fields the ball. For example, the Tulo-Barmes-Helton DP is scored as 6-4-3. Or perhaps Atkins takes it, goes to Barmes, then to Helton: 5-4-3. HOWEVER, you don't score an error if the back end of the double play isn't completed. As scorekeepers say, "you can't assume the double play. You would score this play as a Fielder's Choice, 6-4-3, with the runner out at 2B.

Fielder's choices can be tricky. Basically, any time a runner reaches because the fielder decided to get somebody else out instead, it's considered a fielder's choice.

The final means of recording an out in terms of fielding is the unassisted play, or the "Helton Special". A grounder to 1B where the 1B fields it on their own and either tags the runner or touches the bag is simply scored as "3u," short for "3-unassisted." This can be used for any fielder who can record an out on a ball in play (that isn't an air-out) on their own. You typically only see this with the 1B and 3B, but it happens elsewhere, obviously. Also, if a double play is turned, say, Atkins fields one, touches 3B, throws to Helton, you score it as a 5u-3 DP.

When an out is recorded, you simply mark which out it is in the bottom-right corner of the scoresheet, and circle it. So if Atkins leads off an inning with a sharp grounder to short, you'd score it "6-3" and mark a 1 in the corner and circle it.

Now let's look at the other side of the plate.

Hits are ever so much easier to record. You just mark the batter's progress on the basepaths and indicate how he got there. For example, a single to LF would be simply scored "1B7" indicating 1 base, to the 7 position (LF). A double to RF would be marked as "2B9". A triple to CF is "3B8". Get the idea? Pretty simple stuff.

But what happens if they split the gap, you ask? Well, you score that based on who got to it first and makes the throw back in, with a minor exception which I'll explain in a second. A ball splitting CF/RF will have the CF and RF tearing after the ball, and say the CF gets it first, and Chipper Jones is held to 2 bags because the CF has a cannon of an arm. You'd score that "2B8". The exception occurs when the ball is clearly in RF, but Adam Dunn slid for it, missed it horribly, and Shane Victorino had the play covered and saved an inside-the-parker. I'd still score that as a 2B9.

There's really only 3 or 4 things you need to know about scoring the pitcher's performance. K, BB, HBP, HR.

For a Walk (base on balls, BB) or a hit batsman (HBP), you simply mark the batter's progress to 1B and cite it as a BB or HBP (or IBB if the situation demands).

For a dinger, you write where the ball left the park. For example, Iannetta pulls a ball and dumps it onto the concourse. You score that a "HR7".

We haven't obviously covered everything there is to scorekeeping yet, but we will make sure to tie up as many loose ends coming up next.

Now that we have the notation covered, let's move to the scorecard.

As I run through a demo inning, I'd advise printing a scorecard out and scoring along just to get the feel for it.

The first step is to fill out the details on the scorecard including but not limited to the date, time, scorer, weather, umpires.

The second step is to fill out the lineup, complete with number and position. The player's uniform number goes in the left box, followed by their name, and finishing with their position number. Some people also like to put the inning they first appear in (batting) as well, and they'll do it like this: "24 Dexter Fowler 8/1" to indicate he first batted in the 1st.

Once we have this all filled out, we proceed to the game itself. We'll do a tutorial here, but I want to make one thing pretty clear: This is just a guide. The basics on how to mark outs and hits and the positions are pretty universal, but that doesn't mean you have to follow what I do to the letter. If writing something different is clearer to you, or makes more sense to you, well, it's your scorecard! It's your record of the game, do whatever makes the most sense to you! You'll begin to figure out what works for you pretty quickly if you start scorekeeping regularly.

I'll give you a play-by-play as we do this and then paste how I score it as we continue along.

So we have Dexter Fowler leading off against Randy Johnson. On a 2-1 count, Fowler singles to CF. Nobody out. We score this by darkening the line to show how far Fowler made it on his hit, and then writing the the appropriate notation to show what he did to get there.

Quick interjection: we mark balls and strikes in the bottom left hand corner of the box, balls on the left, strikes on the right. You don't have to be sequential, you can just mark "x" for each strike/ball.

Batting 2nd, Ryan Spilborghs works a 1-2 count, and Dexter Fowler steals 2B. Now, some people will circle the pitch or something like that, I don't usually keep it that detailed.

To score the stolen base, we mark Dex's progress on the basepaths and score it as "SB". You may also choose to score it as "SB7" to indicate he stole the bag while the LF was up.

Continuing the AB, Spilborghs strikes out swinging on the 1-2 pitch (no fouls).

Batting 3rd, Todd Helton grounds out to 2B on a 2-0 count. Fowler to 3B. We mark Fowler's progression along the basepaths by filling in the line and marking who advanced him. In this case, we mark a "3". 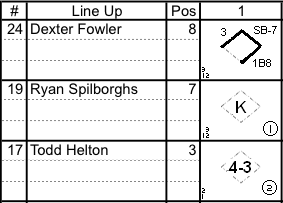 Batting 4th, Atkins singles to LF on a 1-1 count, scoring Fowler. We mark Atkins moving to 1B via the darkened line and the proper notation (1B7), and we advance Fowler to home plate by filling in the line and marking "5" to credit Atkins with the RBI. We also fill Dex's score box in to indicate a run was scored. 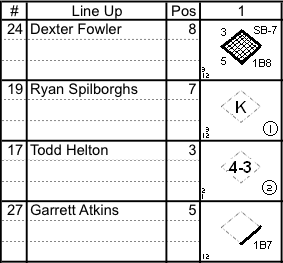 Batting 5th, Hawpe splits the gap with the first pitch, advancing Atkins to 3B (slow). Rowand gets the ball in fast enough to keep Atkins from scoring. We advance Atkins to 3B by marking the "9" to show Hawpe did something, and then we add the arrow to show that Hawpe got him all the way along. 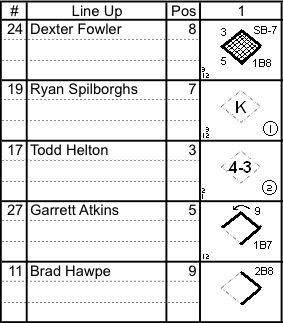 Batting 6th, Tulowitzki walks on 5 pitches, loading the bases. Hawpe and Atkins obviously do not advance. 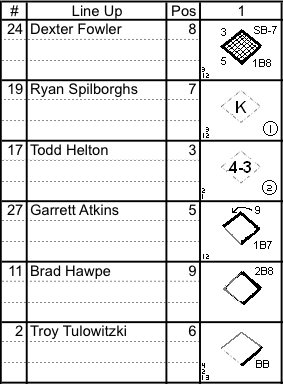 Batting 7th, Ian Stewart pulls a single to RF on the first pitch. Atkins scores. Hawpe scores. Tulowitzki to 3B. 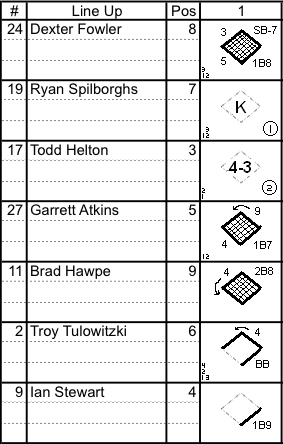 Batting 8th, Iannetta walks on 7 pitches, including a foul ball. 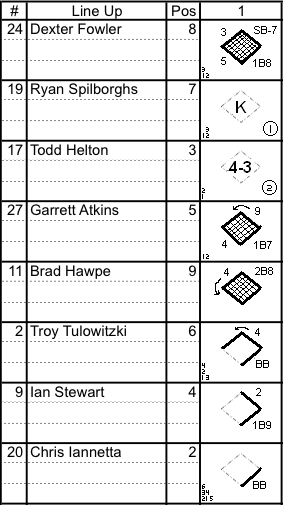 Batting 9th, Ubaldo lines out to SS to end the inning. 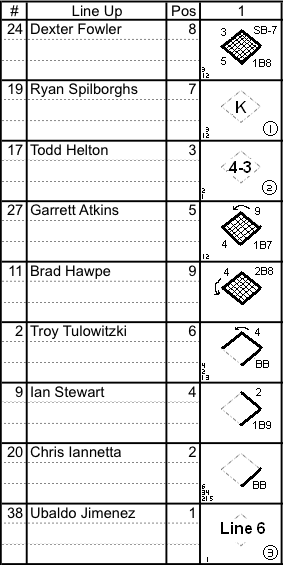 See? Nothing to it. The tricky part is advancing the runners properly as each ensuing at-bat takes place.

So now that you have the basics, go ahead and ask any more detailed questions you might have about scorekeeping. If time permits, I'll try and post how I'd score it.

Remember that baseball is a sport of discipline, not just in pitching, fielding, and batting, but also in how records are kept and statistics are tabulated. Knowing how to keep a proper scorecard will make you part of a game far more than simply sitting and watching ever will.

I'd like to thank Patrick McGovern of Baseballscorecard.com for making available such fine templates. I've gotten a lot of mileage out of his scorecards, and they're really quite marvelous.