Now that I've discussed any and every MLB transaction that I could think of, it is time for Purple Row Academy to look at today's baseball environment from a slightly different angle: dollars and sense. In other words, over the next few weeks I'll examine a number of factors that cause teams to make tough decisions in these hard economic times. In this session, I'll examine the Opening Day payrolls of the 30 MLB teams and perform basic analysis on some recent trend data. In future sessions I will analyze this data from several angles, including per player salary, payroll efficiency, and revenue sharing.

Is this decline in response to the economic recession? It is very possible, and many teams have certainly used it as a reason for the tightening of their belts. However, as Brown notes, this decline in payroll spending could also merely be a correction accounting for an abnormal increase in spending from 2007 to 2008 (8.15%) compared to previous years (6.27 percent from ’04 to ’05, 6.46 percent from ’05 to ’06, and 7.19 percent from ’06 to ’07). 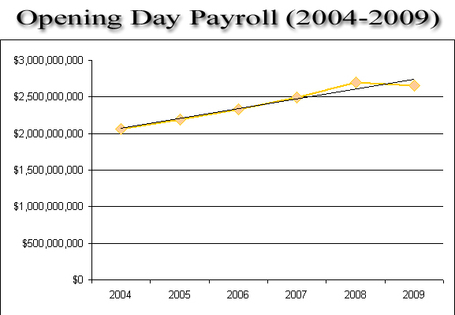 Ultimately, though, the total payroll expenditure number only tells us so much. Let's break this down a little more--by identifying those teams that had large changes in payroll from 2008 to 2009, chart courtesy of Maury Brown and data from the USA Today MLB salary database.

Note that the payroll data does not include money paid or received in trades or for players who have been released. For example, the $875,000 the Cubs are paying the Rockies for Jason Marquis' salary this year is not reflected on this chart and is counted against the Rockies' ODP.

So what can we learn from this chart? First of all, that the Yankees had a massive payroll last year and even after signing five Type A Free Agents this offseason, they've slightly decreased payroll as they are moving into their new cash cow stadium. Even with their decrease, the Yankees have the highest payroll in baseball by $52,075,202 over the second place Mets.

Secondly, only a few teams (%s denoted in bold in the chart) have significantly cut payroll and a greater amount of teams have actually added a double digit % to their payroll (8 to 7).

Join me after the jump for more payroll analysis...

Let's examine a couple of teams with the biggest % payroll increases on the chart.

The largest number belongs to the Marlins, who increased payroll a whopping 68.68%...and still have the lowest payroll in the league by almost $7 million. This goes to show you just how low their payroll was last season. Due to their almost complete reliance on young, cheap players, the Marlins' payroll increase is almost completely from the salary arbitration process--which, as I noted previously, averages a 172% salary increase for all arbitration eligible players. The Marlins had several such players, but it was the huge salary increases given to Dan Uggla (1189% raise) and Hanley Ramirez (1253% raise) that really forced the Marlins to make the jump in ODP from tiny to small.

In fact, the salary arbitration process was the main reason that teams increased payroll this year.  Most notably, the Phillies (Howard and Hamels), Royals (Greinke), Diamondbacks, Astros, and the Rockies were victims of this trend. All of these teams had multiple players eligible for arbitration raises (in the Rockies' case it was six players), which led to a natural salary increase just to keep the status quo.

Meanwhile, teams like the Rays (44.48%) and the Athletics (29.90%), due to recent success or seeing an opportunity in the bear market, took on payroll big time through either signing players long-term (Longoria), acquiring free agents  (Giambi, Burrell), or trading for top players (Holliday).

However, many teams have also had a big % decrease in ODP from last year. Most notable is the Padres and their 40.64% payroll cut, stemming largely from the combination of a horrible 2008 season (meaning an increased focus on giving young, cheap pre-arbitration players MLB experience) and the ongoing divorce of team owner John Moores that forced him to sell the team to former D-Backs executive Jeff Moorad. The Mariners also fit this basic template, as do the Blue Jays to an extent as they play in a very difficult division.

After spending heavily in the recent past after some postseason success, teams like the Cardinals, White Sox, and Tigers returned their payrolls to a more reasonable level this season (meaning a precipitous drop from their success-inflated payrolls the past couple of years).

Meanwhile, the Dodgers have also significantly reduced payroll (by 15.29%) under the McCourt regime. The McCourts were not happy with some bad free agent contracts given by the Dodgers in the recent past (Juan Pierre and Andruw Jones come to mind) and seem to be hit hard by the recession. As it is, the Dodgers still have the biggest payroll by far in the NL West.

The chart below, courtesy of Andrew Johnson, shows the ODP of NL West teams from 2000-2008. Note: the axes are mis-labeled (should switch years and salary). 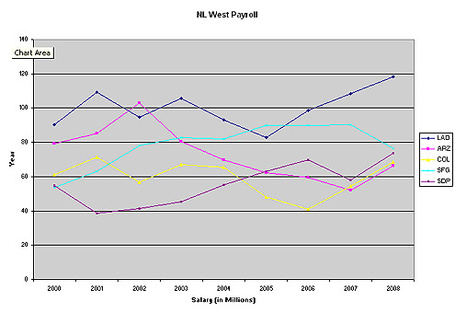 As you can see, the Dodgers have consistently had the highest payroll in the West. Meanwhile, the Rockies, Padres, and D-Backs have consistently been grouped together fairly closely at the bottom of late. However, this year with the aforementioned decline in payroll of the Padres, they are clearly bringing up the rear in the West. The D-Backs (up 11.05%) and Rockies (up 9.53%), very similarly built teams, had similar increases in payroll (and in overall payroll) due in part to salary arbitration. The Giants increased their payroll moderately (up 7.43%) in signing Randy Johnson, among others, to make them a clear second to the Dodgers in payroll.

To conclude this session, here are all of the Rockies' Opening Day Payrolls:

* Minus $875,000 from Cubs for Jason Marquis' salary...data for all years doesn't contain payments from other teams for traded/released players.