For the second time in just ten games, the Colorado Rockies (4-6) have allowed teammates to each hit two home runs in a game.  Today, it was Andre Ethier and Manny Ramirez, who had combined to hit just two in the season's first eleven games, both by Ethier on April 13.  Ramirez had yet to hit a home run against Colorado prior to today.  The longball brigade boosted the Los Angeles Dodgers (9-3) to a 9-5 victory Saturday afternoon.

Aaron Cook (0-1) surrendered three of those home runs.  He left after four innings in which he allowed five runs on eight hits and two walks.  Chad Billingsley (3-0) allowed three runs on four hits in six innings for his major league leading third win.  The Rockies' lone hit off Billingsley in the first five innings was a Seth Smith double that Matt Kemp lost in the sun. Sparked by a two-RBI Brad Hawpe triple, the Rockies cut the lead to 5-3 in the sixth.

A full comeback seemed imminent in the seventh inning against Guillermo Mota after a Dexter Fowler single and Jeff Baker walk.  But Seth Smith failed to lay down a bunt and Todd Helton lined into an inning-ending double play.

Alan Embree and Ryan Speier combined to allow four runs on three hits, two walks and an Ian Stewart fielding error in the seventh to put the game out of reach.  Included in the frustrating package was Ethier's second round-tripper and an RBI single by relief pitcher Will Ohman in his fifth career at-bat.

Ian Stewart added his second home run in the eighth, and Colorado scratched out just one run after loading the bases in the ninth. 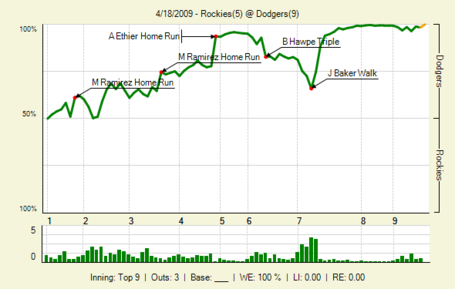 It could have been a lot worse

Jason Hammel gave us a glimpse of why we traded for him, pitching two innings of shutout ball while allowing just one hit and two strikeouts.  Perhaps jumping to conclusions after one appearance is just that, hmm?

Brad Hawpe appears to be shedding his slow start, and Dexter Fowler laced two singles off the bench.

It didn't mean much today, but five runs on the road against a hot Los Angeles team and their ace in a pitchers' park is solid work.

Coming into today, the leadoff spot achieved just a .220 OBP, and yes that includes Dexter Fowler.  It didn't get any better today, as the #1 spot in the lineup went 0-for-4 with 3 K's.  As table-setters go, so will the offense.  When will the top of the line-up catch fire?

Aaron Cook had a favorable match-up to turn his poor start around - playing a team he has dominated of late in a park better suited for pitching.  The Opening Day starter failed to live up to the billing.  When will Cook be Cook?

Speaking of struggling pitchers, Alan Embree didn't do much to prove he was the best free agent LOOGY, even among those at Dodgers Stadium Saturday.

All of you screaming for Hurdle's head need to take a sip of beer, sit down and breathe.  An objective viewer would note that Los Angeles had the favorable pitching match-ups in both games and were the home team to boot.  Throw in their torrid start and these two losses were the most likely result.  A 4-6 team who has played the class of the league mostly on the road is not a terrible showing.  We're 3.5 games out of the playoff picture and there's still 152 games left to play, 79 at home.

The offense won't rank 27th in hitting all season - that will drastically improve, and with it, so will the record.  We're still +4 in run differential.

The Rockies hope to salvage the series by pulling out the last game on Sunday.  Ubaldo Jimenez gives the Rockies a notable edge over James McDonald.

A lot of newbies today.  Welcome