Not much went right today for the Rockies, save for home runs from Brad Hawpe and Chris Iannetta in the sixth inning, as the Rockies fell 14-2 to the Los Angeles Dodgers. With the win LA completed their sweep of Colorado.

The main damage from the Dodgers came in the fifth inning, where the Boys in Blue extended a 4-0 game to 11-0 thanks to a grand slam from Matt Kemp (one of two HRs for Kemp) and a hit parade mostly against the hapless Matt Belisle.

Ubaldo Jimenez had a line of 4.1 IP, 7 H, 7 R, 4 BB, 3 K. He never really seemed comfortable today, and the Dodgers were hitting him solidly. However, Matt Belisle was much, much worse. He came in with the bases loaded and one out in the fifth, and promptly gave up the aforementioned grand slam, followed by four more hits. He faced six men and gave up five hits and four runs.

To be honest though, no Rockies pitcher did well today. The Dodgers pounded out 19 hits (6 doubles and Kemp's 2 HRs among them), hitting everyone from Jimenez to Manny Corpas and Huston Street hard.

As you can see from the graph below, the Rockies were out of the game by the time the sixth inning rolled around. 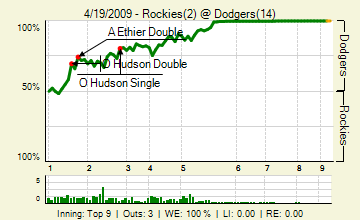 Rowbot Roll Call--Thanks to those who stayed with me today (almost 700 total posts from 32 users) despite the lousy performance we got from the Rockies: