Jason Marquis looked wild tonight, having trouble keeping pitches down and finding consistent places to put his strikes. As a result, Mark Reynolds and Miguel Montero both took advantages of pitches left right in the wheelhouse or straight over the plate and tallied 4 of the Dbacks' eventual 6 runs on souvenir balls.

Marquis, not known for letting too many runners on via the walk, surrendered 3 free passes while only punching out 3. Marquis also scattered 7 additional hits to the 2 dingers, leading to a closing line of 5.0IP, 6ER, 3K, 3BB, 9H en route to his first L of the season.

But before getting too hard on Jason, there were many other people wearing the black cutoffs tonight who also should take a piece of the blame. The Rockies managed 8 hits of their own, as well as 2 walks, but left 7 men on and were 1-9 with runners in scoring position, including two 2-on-2-out situations, one in the 3rd and one in the 7th which both came up empty. Many, many goats in the lineup, so it isn't fair to pin anyone with the loss. Team effort.

Arizona starter Jon Garland looked very good, striking out 5 while only walking 2 as he pitched into the 7th, allowing 2 runs (1 earned) in his 2nd win of the season.

A very bitter tip-of-the-cap to Arizona CF Chris Young for making 2 massive catches on struck balls that should've not only dropped but caused Chase Field to explode. Dexter Fowler clubbed a massive line drive in the 5th with 2 out and 1 on which Young chased back to the track and almost lost, yet managed to make the catch on. Again, in the 9th, with 1 out, Jeff Baker belted a slider high and deep that may have left the playing field in a park that ISN'T a cathedral that Chris Young was able to snatch before running into the CF wall. I hope that leaves a small bruise, Young!

For the sake of seeing the turning points in the game, I hereby present the Live Win Probability graphs, courtesy of Fangraphs. 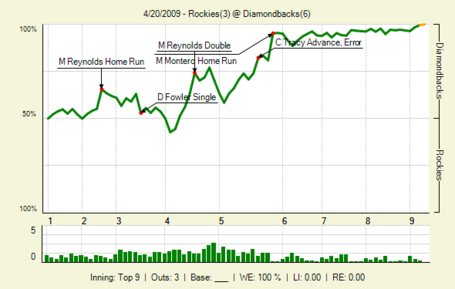 Thanks to everyone for making us have to open yet another overflow thread, it's great having things to talk about!

I missed like 4 innings and I still managed 88 posts. What's the matter with me?

* Gold Star for username that amused me the most.