Sedona Dread: Rockies storm back on D-backs to even series

Share All sharing options for: Sedona Dread: Rockies storm back on D-backs to even series

Down six to three in the fifth inning, with starting pitcher Franklin Morales shelved early due to a strained shoulder, the vastly under rated Rockies showed a kind of resolve that they have been lacking thus far in 2009, coming back and defeating the Diamondbacks nine to six.

A four run sixth inning, keyed by a run scoring two out single from Todd Helton followed by a two run double from Brad Hawpe gave the Rockies the lead. A two run homerun by Helton in the top of the eighth added some necessary insurance and the bullpen held the Diamondbacks scoreless over the final four plus two thirds frames.

With a victory in the rubber match on Wednesday, the Rockies could send the D-backs to their fifth straight series loss, fourth straight at home to start 2009. 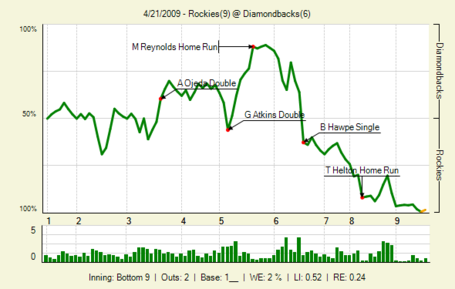