He no longer remains winless. The he being Dan Haren, not Jorge De La Rosa. Both pitchers threw steady games for six innings, but then came the bottom of the seventh for Jorge De La Rosa to pitch. He allowed a single to start an inning before recording the first out. Then back-to-back singles led to a 1-0 D'Backs lead. After an intentional walk and a Stephen Drew walk, JDLR left the game for Jason Grilli, who subsequently walked in the second run.

You have to give De La Rosa a lot of credit for keeping the Rockies in the game that long. There were complaints after his last start that he needed to go longer into games, and he did do that today. The bullpen didn't ruin it like last time. Dan Haren did his job today to shut down the Rockies and that's a big problem.

Ryan Spilborghs, Brad Hawpe, and Seth Smith each had multi-hit games, four for the former and two each for the latter two. Not much else you can say about the offense today. 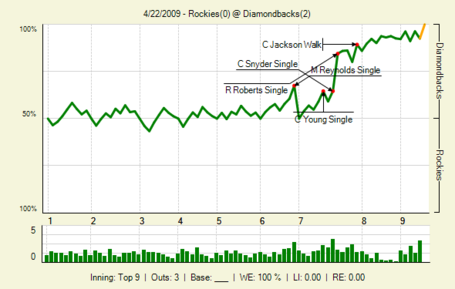