Share All sharing options for: Rockies fall to Dodgers in series opener

In a topsy turvy game, the Rockies showed fight, but came up just short to remain winless against the Los Angeles Dodgers in 2009, falling 6 to 5. The Dodgers used a two run, two out rally in the top of the eighth inning to take a 5-3 lead, but a two run homerun by Clint Barmes in the bottom half revived the Rockies. Unfortunately, that resucitation was short lived, as the Dodgers scored one more time in the ninth after James Loney hit a lead off double off of Manny Corpas and came around to score on a two out Brad Ausmus single. Jonathan Broxton came on in the ninth to record the save.

Aaron Cook scrambled out of two bases loaded, zero out situations and pitched six innings for the Rockies, giving up just three runs in the process. Ryan Spilborghs, Todd Helton and Garrett Atkins were all able to come up with hits with runners in scoring position in the early going to help the Rockies keep up with the Dodgers, but both teams failed to capitalize on several opportunities in the early going to break the game open. Cook had some of the same issues with control of his previous two starts, but he finished with a 9-4 groundout to flyout ratio that showed signs that his sinker is turning a corner, particularly after a shaky first inning saw him give up two runs before he even retired a single batter.

Huston Street pitched one and two thirds innings in relief of Cook, allowing a two out double in the eighth inning to Ausmus and an RBI bloop single to Mark Loretta before the wheels started to come off. Jason Grilli came on to put out the fire, but lived up to the gas can nickname, allowing a single to Rafael Furcal, a walk to Orlando Hudson and a wild pitch to score Loretta. Alan Embree finally got the third out for the Rockies by retiring Andre Ethier on a line drive to Brad Hawpe. 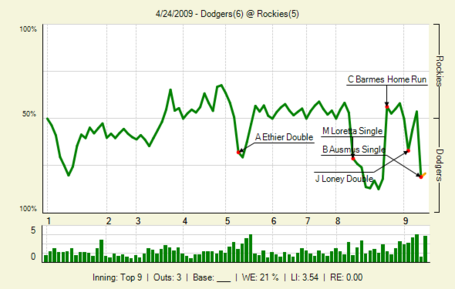 The Rockies rallied themselves, with an eighth inning single by Chris Iannetta off of Hong-Chih Kuo being followed up with Clint Barmes' two run blast. The Rockies made things interesting in the ninth inning, with Garrett Atkins reaching on a throwing error by Orlando Hudson. Omar Quintanilla came on to pinch run and was moved over to second with one out when Troy Tulowitzki collected his fourth walk of the game. Broxton then struck out pinch hitter Seth Smith for the second out and Chris Iannetta for the third. The Rockies fall to 5-10 on the season, Los Angeles is 12-5 and six games ahead in the NL West.