Dodgers 6, Rockies 5: Time to Pull Your Hair Out

Share All sharing options for: Dodgers 6, Rockies 5: Time to Pull Your Hair Out

The Rockies commercials are looking way too accurate right now.  Aaron Cook isn't doing anything productive, Garrett Atkins is mashing things but not in an ultimately helpful way, Troy Tulowitzki is conspicuously absent, and then there's the breadwinner of accuracy:  "If Ubaldo, try Hair-B-There."

The way Ubaldo Jimenez (1-3) has pitched and the way the Rockies have performed since Game #4 (an icy 3-10), we all might need some Hair-B-There very soon.

Jimenez allowed 12 base runners in his four innings against just three strikeouts.  That resulted in six earned runs, and all six scored with two outs.  The Dodgers pummled Jimenez for four runs in the top of the first, and they would never reliquish that lead.  James McDonald (1-1) was not effective either (5 IP, 5 ER, 4 BB), but he was good enough to earn his first career win.

Garrett Atkins hit a low line drive out for his first home run in 44 at-bats in the fifth inning to pull the score to 6-5, but that was as close as Colorado would get.  Box Score 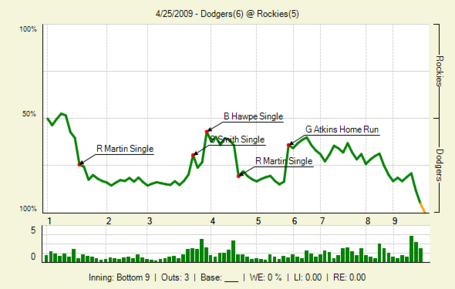 Manny Ramirez was completely neutralized by Rockies pitching today, which is usually a great sign.  Manny was 0-for-5 with 3 K's.

Three of the more productive bats - Garrett Atkins, Seth Smith and Brad Hawpe - continued their trends by teaming up for 5 hits, 5 RBI, and a HR.  Unfortunately, that was all the offense could muster as a team.

Unfortunately, the Dodgers' pen was equally impressive - more so when considering the only reliever Joe Torre used was Ramon Troncoso, who pitched four shutout one-hit innings (all nursing a one run lead) for his first MLB save.

As noted above, the offense could only manage five hits off the fifth starter of a rotation that was deemed weak not a month ago.

Jason Marquis will try to atone for his poor start Monday by salvaging the series against Clayton Kershaw at 1:10 Sunday afternoon.  The Lord of the PR Prediction competition forecasted a 20-0 victory, so make sure you tune in, and maybe you'll see me on TV.

Award for most deranged comment goes to Rox Girl, with an assist to Silverblood, resulting in this.