Share All sharing options for: Dexter Fowler steals 5 bases in 12-7 victory over Padres

The Rockies stole eight bases tonight, Dexter Fowler taking five of them. Fowler stole five bases. Yes, Willy Taveras also did this. But this is Dexter Fowler we're talking about! Dexter Fowler's a lot more useful than Willy Taveras. Fowler had two hits and walked twice. We also saw big nights from Todd Helton (2-for-4, 2 RBI), Garrett Atkins (3-for-5, 2 RBI),  Brad Hawpe (2-for-3, 2 RBI), Ian Stewart (1-for-5, 3 RBI. 2B), and Clint Barmes (2-for-4, 2 RBI). Yep, not a single home run by the Rockies in the game..

The same can't be said for the San Diego Padres, as Jody Gerut hit a homer in the fourth. Jason Hammel looked decent through the first two inning before a four-run third inning. He wound up with this line: 3 IP, 5/4 R/ER, 7 H, 3 BB, 2 K. Glendon Rusch allowed the other two runs. Jason Grilli was lights out over 1 1/3 innings, striking out three. Huston Street in the eighth and Manny Corpas in the ninth sealed the deal. 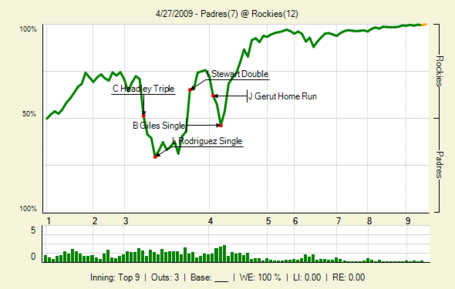 We also saw Brad Hawpe get hit by the ball on a throw to second. He was taken out of the game and likely has a concussion. Nothing else on that yet.