Tuesday Rockpile: If you're not a Dexter fan, you are not paying attention

Share All sharing options for: Tuesday Rockpile: If you're not a Dexter fan, you are not paying attention

Dexter Fowler is more than just an awesome name

The evolution of Dexter Fowler has reached light ludicrous Dexter speed.  It has been barely a month since the Purple Row community voted that Fowler should not even be on the roster.  Yet here he is, a day after tying Willy Taveras for second in SBs in a game with five as a Rockie (all in the first four innings).  He could have had six if relief pitcher Glendon Rusch didn't single in front of him in the fifth.

The five stolen bases left him one short of the franchise and modern era record by Eric Young against the Dodgers.  Young and Co. took advantage of the exaggerated delivery time of Hideo Nomo that day, just as Fowler and Co. took advantage of Chris Young's long delivery last night.  Chris Young is an exceptionally easy target - all 44 attempted thieves were successful against him in 2007. 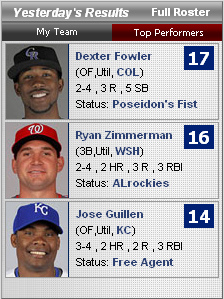 The Rockies pilfered eight bags as a team last night alone.  In case you're curious, that catapults Colorado from 11th in the NL in SBs to first.  That's right - first.  And to think speed was to be this offense's weakness...that is, until Fowler showed up.  Fowler ranks second in MLB in steals, behind only Jacoby Ellsbury.  The steals helped him become MLB.com's number one fantasy star of the night. ------>

Not just that, but he is hitting over .300, ranks third on the team in OPS behind Brad Hawpe and Seth Smith and is one home run away from being tied for the team lead.  The world is taking notice.  Fowler is featured prominently bloggers and more bloggers, Tracy Ringolsby, and Patrick Saunders.

"They give me the green light whenever I get on base," said Fowler, who has four steals already. "If I can get a good jump, I'll go whenever I can go."

"He has the green light, but right now he trusts that I know the good situations for him to run," first base coach Glenallen Hill told the team Web site. "Pretty soon, I'm not going to have to tell him when it's a good time to run."

The Rockies scored 22 runs in the last two days, and they did that while facing two very tough pitchers in Chris Young and Clayton Kershaw.  The last time they scored at least 22 runs in consecutive double digit games was July 4 and 5 last season vs. Florida.  The outburst has launched the Rockies' previously anemic offense to 4th in the NL in runs.

Despite being four games under .500, the Rockies actually have a Pythagorean win percentage right at .500, which is good for second place in the NL West.  In fact, that is a better showing than the Yankees or NL East leading Marlins.  And we're still waiting on Cook, Jimenez, Street, Corpas, Buchholz, Helton, Iannetta and Tulowitzki to contribute anywhere near their capability.

After Brad Hawpe was hit in the neck by a Nick Hundley pickoff attempt, he was taken to Rose Medical Center for evaluation.  Nothing has been confirmed, though rumor has it he suffered a concussion.  That's all we know now, but for what it is worth, our resident medic believes he'll be just fine.

Dave Cameron at FanGraphs says the Diamondbacks are "in serious trouble."

They couldn’t win the division with quality play last April, but they very well could have lost it with their struggles this April.