Share All sharing options for: No RISP-onse, Failure to push home baserunners once again wrecks Rockies

Painful as it is, consider the eight and ninth innings of tonight's 4-3 loss to the Padres.

In the top of the eighth, with the Rockies ahead three to two. David Eckstein leads off with a double off of Alan Embree on the fourth straight fastball. Embree retires the next two batters Brian Giles and Adrian to get into a situation of runner on third, two outs, with Chase Headley at the plate. Two more fastballs later, Headley ropes a single, the score is tied and Embree is pulled for Huston Street who ends the inning.

In the bottom of the eighth, Ian Stewart walks and then advances to third with one out on an Omar Quintanilla single. After Yorvit Torrealba is hit by a pitch, Troy Tulowitzki comes up with the bases loaded and one out. On the second fastball he sees from Duaner Sanchez, he hits a weak grounder to short for a double play.

The optional conclusions that could be drawn from this?

In the top half, Nick Hundley triples off Manny Corpas with none out. One out later, Luis Rodriguez singles. Padres lead 4 to 3.

In the bottom half, Dexter Fowler K's, Ryan Spilborghs pops out. Todd Helton doubles off of Heath Bell with two out and Garret Atkins than grounds into a force out for the third out of the inning and final out of the ballgame.

These choices actually don't have to be mutually exclusive, more than one conclusion could be right. The Rockies have now dropped to 0-5 in one run contests, 7-12 overall. 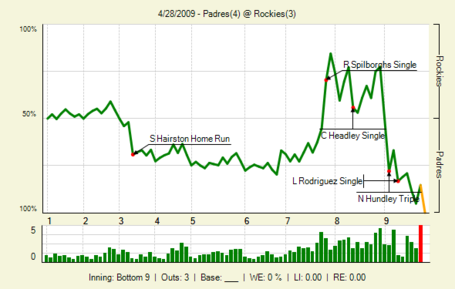 Tough luck for Jorge De La Rosa, who once again came up with an excellent start save the damage of one mistake pitch in the third inning.