With their 7-5 victory over the Padres, the Rockies won their second series of the season (the first being the three-game set against the D'Backs to start the season).

How'd it happen? Strong pitching by Aaron Cook and great hitting by Chris Iannetta and Todd Helton. Cook breezed through six innings, and didn't allow a hit until the fourth. There were two seven-pitch innings mixed in there. Cook's troubles in the seventh were a result of a leadoff homer and then a two-run homer by Henry Blanco. Yes, Henry Blanco. Still, his WPA for this game was 0.280.

We saw Matt Belisle allowed a two-run homer in the eighth to bring the game to 7-5, but Huston Street shut down the Padres in the ninth by striking out all three batters. 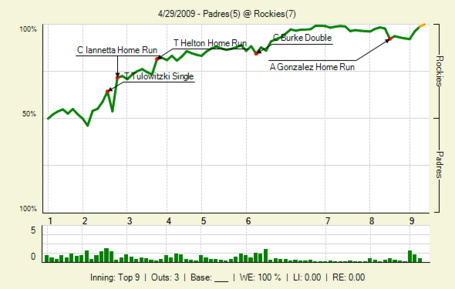