Share All sharing options for: Friday Rockpile: The Rockies head to Sin City

Today and tomorrow the Colorado Rockies will play a two-game series against the Seattle Mariners in Las Vegas. If what happens in Vegas stays in Vegas, that's fine as long as it's the Rockies completely bombing. But good hitting and pitching shouldn't stay in Vegas if that's what the Rockies have in these next two games.

Let's just not hear that one of the guys misses a game because he got caught up in a game of craps or blackjack. Or bets on baseball. Uh, yeah, baseball players should have learned a lesson about betting on baseball years ago.

Cashman Field will host the two exhibition games. It's the home of the Las Vegas 51s, now the Toronto Blue Jays' Triple A affiliate. The Los Angeles Dodgers had the affiliation from 2001-2008, but now send their Triple A guys to the Albuquerque Isotopes. The stadium holds just under 10K fans, but has seen over 300K fans come each season since the stadium opened in 1983. Also, you can get to know the ground rules of Cashman Field here. 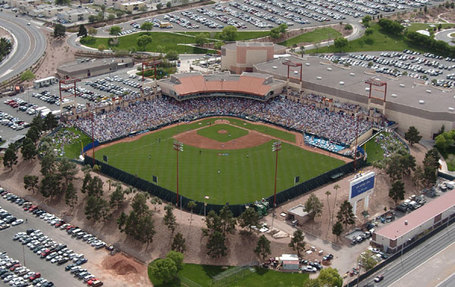 So, Huston Street is the closer, and Matt Belisle can still claim a spot on the roster if management decides to send Franklin Morales to the minors after his first start in order to pitch until his services are needed again in late April. That must mean we can look at another NL West preview.

The Baseball Analysts previewed the NL West on April 1. Here's how to bullet point what's written about the Rockies:

Ho-hum. And how many of those did you guess before reading them?