In this installment of Rockies Retro, we'll profile a guy who still holds a share of the Colorado Rockies' all-time single season wins record. Since we already did Pedro Astacio, and Jeff Francis is still a member of the team (kind of), it can only be one person - and that person is Kevin Ritz.

Kevin Ritz was acquired by the Rockies from the Detroit Tigers in the 1992 MLB Expansion Draft, as the 46th overall selection. After sitting out the entire 1993 season with an injury and being released following the season, he re-signed with Colorado a couple of months later and did not make the team out of Spring Training. He ended up starting the year in Colorado Springs, where he went 5-0 with a 1.29 ERA before getting the call to the big league club and proceeding to lose four out of his first five decisions for the Rox. He recovered fairly nicely, and went on to post a 5-6 record with a 5.62 ERA. As a pitcher who always struggled with control, 1994 was no different for Ritz - as his 1.51 walk rate would suggest.

Partly because of his strong finish in 1994 (and also partly because the Rockies didn't really have anybody else), Ritz began 1995 in the starting rotation for Colorado. He responded by winning 5 out of his first six decisions, all while keeping the walks down more so than he ever had up to that point, issuing only 19 free passes compared to 47 strikeouts. On top of that, he only allowed 51 hits in 57 innings pitched in those first ten starts. At the all-star break, Ritz was 7-3 with a 3.50 ERA - arguably the best any Rockies pitcher had ever performed up to that point in either of the club's previous two seasons. After climbing to 9-5 at the end of July, though, Ritz ended up going 0-5 in August, putting him under .500 and temporarily knocking him out of the starting rotation. He struggled with his control over the course of that month, as his 1:1 K/BB ratio indicated. However, another strong finish (2 wins and 2 saves in September) re-cemented his place in the starting rotation.

One of the more bizarre seasons, statistics-wise at least, of any pitcher in recent memory was Ritz's 1996 season. As previously stated, Ritz did what counts - he won a franchise-record 17 games that season. However, some of his stats would lead one to believe that his record could have (and probably should have) beeen the other way around. Ritz had a 1:1 K/BB ratio for the entire season, compiled a 5.28 ERA, gave up 236 hits in 213 innings, and allowed a league-worst 125 earned runs. However, all things considered, he truly was one of the better pitchers in the league that season, if nothing else than because of his ability to pitch that many consistent innings in the most hitter-friendly home park the big leagues had seen in a long time, if not ever, and still keep a decent win-loss record.

1997 was a different animal for Ritz. Expecting to build off the momentum he created for himself a season earlier, Kevin instead got smacked around for half a season and continued to allow far too many baserunners. He landed on the DL on the Fourth of July and remained there for the rest of the season following surgery to repair a torn labrum two weeks later, but not before compiling a 6-8 record and a 5.87 ERA, while only slightly improving his K/BB ratio to 1.22.

While attempting to come back from the injury and fight for the final spot in the rotation, Ritz re-injured his arm in a Spring Training game against the Chicago White Sox on March 9th, 1998. Though he had a short stint with the big league club in early-May of that year, Ritz's arm troubles had essentially cost him his career at that point, and he pitched in his final Major League game on May 16th - a loss to Milwaukee in which he gave up six runs in five innings.

As of August of 2008, Ritz resides in Cambridge, OH with his wife and four kids. He will forever live in the minds of Rockies fans for his contributions to the team in the early days (especially the 1995 playoff run) and, at least for a short while, because he shares the club record for most wins in a single season.

So, to Kevin Ritz (the family man): Purple Row Salutes You! 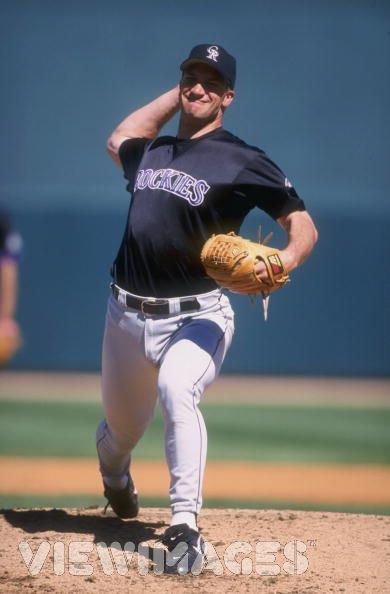